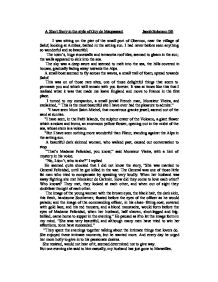 A Short Story in the style of Guy de Maupassant

A Short Story in the style of Guy de Maupassant Jacob Solomon (B) I was sitting on the pier of the small port of Obernon, near the village of Saluf, looking at Antibes, bathed in the setting sun. I had never before seen anything so wonderful and so beautiful. The town's, huge stonewalls and terracotta roof tiles, seemed to gleam in the sun; the walls appeared to sink into the sea. The sky was a deep azure and seemed to melt into the sea, the hills covered in houses, gradually fading away towards the Alps. A small boat seemed to fly across the waves, a small trail of foam, spread towards Saluf. This was on of those rare sites, one of those delightful things that seem to permeate you and which will remain with you forever. It was at times like this that I realised what it was that made me leave England and move to France in the first place. I turned to my companion, a small jovial French man, Monsieur Vieira, and exclaimed, " This is the most beautiful site I have ever had the pleasure to admire." ...read more.

Who knows? They met, they looked at each other, and when out of sight they doubtless thought of each other. The image of the young woman with the brown eyes, the black hair, the dark skin, this fresh, handsome Southerner, floated before the eyes of the officer as he would parade; and the image of the commanding officer, in his close- fitting coat, covered with gold lace, and his red trousers, and a blond moustache, would form before the eyes of Madame Felicidad, when her husband, half shaven, short-legged and big-bellied, came home to supper in the evening." He paused as if to let the image form in my mind. "She was very beautiful, and although many men have tried to win her affections, none have succeeded." "They spent the evenings together talking about the intimate things that lovers do. She enjoyed these intimate moments, but he wanted more. And every day he urged her more hotly to give in to his passionate desires. She resisted, would not hear of it, seemed determined not to give way. ...read more.

Frightened they retired to deliberate; then, after having taken counsel one with the other, they came back, giving their names. But the soldiers evidently had strict orders, for they threatened to shoot; and the two scared travellers ran off. The people of Antibes were scared to death, what did this new ban mean, most thought it meant invasion and stayed locked away in their homes. No-one ever found out what happened to General Felicidad; and a year later Monsieur de Carlmin was transferred to another base." He lit his pipe as he always did; he had finished his story. Madame Felicidad returned, her saunter, ended. She passed gravely near me, with her eyes fixed on the Alps, whose summits now gleamed rosy in the last rays of the setting sun. I longed to speak to her, this poor, sad woman, who would ever be thinking of that night of love, now long past, and of the valiant man. Had she seen him again? Did she still love him? And by now he had probably forgotten her, if he did not relate this audacious, comical and tender farce to his comrades over their cups. ...read more.