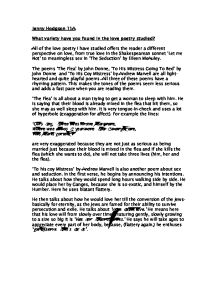 All of the love poetry I have studied offers the reader a different perspective on love, from true love in the Shakespearean sonnet 'Let me Not' to meaningless sex in 'The Seduction' by Eileen McAuley.

Jenny Hodgson 11A What variety have you found in the love poetry studied? All of the love poetry I have studied offers the reader a different perspective on love, from true love in the Shakespearean sonnet 'Let me Not' to meaningless sex in 'The Seduction' by Eileen McAuley. The poems 'The Flea' by John Donne, 'To His Mistress Going To Bed' by John Donne and 'To His Coy Mistress' by Andrew Marvell are all light-hearted and quite playful poems. All three of these poems have a rhyming pattern. This makes the tones of the poems seem less serious and adds a fast pace when you are reading them. 'The Flea' is all about a man trying to get a woman to sleep with him. He is saying that their blood is already mixed in the flea that bit them, so she may as well sleep with him. It is very tongue-in-cheek and uses a lot of hyperbole (exaggeration for affect). For example the lines: 'Oh stay, three lives in one flea spare, Where wee almost, yea more that maryed are, This flea is you and I' are very exaggerated because they are not just as serious as being married just because their blood is mixed in the flea and if she kills the flea (which she wants to do), she will not take three lives (him, her and the flea). ...read more.

'O no, it is an ever fixed marke, That looks on tempests and is never shaken; It is the star to every wandering barke.' The third quatrain talks about the affect of time on love. It says that over time love does not fade away. The words 'bending sickles compasse come' gives an image of death and the grim reaper, and compasse gives the image of direction. This could be meant to mean that death is the only thing that destroys love.The poem concludes with the lines 'If this be error and upon me proved, I never writ, nor no man ever loved.' Shakespeare is saying prove him wrong knowing he is right. It is his way of persuading his points about love. The last two statements ('I never writ' and 'nor no man ever loved') are obviously not true so he can't be proved wrong. 'What you Are' by Roger McGough is also a poem about true love. It includes lots of different images which are all supposed to be what his true love is. All of the images are nice images, which help to explain why he loves her. For example: 'You are the teddy bear (as good as new) found beside a road accident.' This conveys that she is perfect and innocent in any kind of chaotic situation. ...read more.

Both of these things place the poem in a particular time. There is a lot of talk of teenage magazines in the poem, which just emphasis how young she was. The line 'About O levels she'd be sitting in June' also emphasises how young she was because she was a schoolgirl. The use of the word 'Iodine' could also be used to emphasise this because it is used in chemistry experiments at school. The poem says: 'When she discovered she was three months gone She sobbed in the cool, locked, darkness of her room, And she ripped up all her 'My Guy' and 'Jackie' photo-comics Until they were just like bright paper, like confetti, strewn' This gives a sense of how she is such a hopeless romantic. Ripping up the magazines could symbolise her ripping up her childhood. The words 'confetti' and 'strewn' symbolise marriage which is what she hoped would happen. Toward the end of the poem it asks lots of questions. This is saying that she feels stupid and thinks 'why her?' The poem them concludes with the lines 'And better, now, to turn away, move away, fade away, Than to have they neighbours whisper that 'you always looked the type' This says that she feels trapped and ashamed and that she worries what other people think about her. However, this poem had a less serious feel because of its definite rhyming pattern. It also has a lot of commas which added rhythm when saying the poem. ...read more.