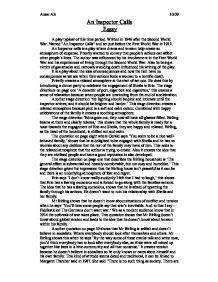 A play typical of this time period. Written in 1946 after the Second World War. Named “An Inspector Calls” and set just before the First World War in 1912.

An Inspector calls is a play where drama and tension help create an atmosphere of suspense. Priestly wanted to convey that people’s actions can affect other people’s lives. The author was influenced by his involvement in the First World War and his experiences of living through the Second World War. Also he being a victim of gas attacks and narrowly avoiding death influenced his writing of the play.

It is a play about the idea of consequences and how the rich have no consequences as we see when their actions force a woman to a horrific death.

Priestly creates a relaxed atmosphere at the start of act one. He does this by introducing a dinner party to celebrate the engagement of Sheila to Eric. The stage directions on page one ‘A decanter of port, cigar box and cigarettes,’ this creates a sense of relaxation because when people are unwinding from the end of a celebration.

Another stage direction ‘the lighting should be pink and intimate until the inspector arrives, and it should be brighter and harder.’ This stage direction creates a relaxed atmosphere because pink is a soft and calm colour. Combined with happy celebrations of the family it creates a soothing atmosphere.

The stage direction ‘Edna goes out, they now all have all glasses filled. Birling beams at them and clearly relaxes,’ this shows that the whole family is ready for a toast towards the engagement of Eric and Sheila, they are happy and relaxed. Birling, as the head of the household, is chilled out and calm.

The quotation on page eight where Gerald says ‘You seem to be a nice well-behaved family,’ shows that he is delighted to be engaged with Sheila and he has no worries about any dislikes that the rest of the family may have of him. This adds to the relaxed atmosphere that the author is trying to create. Also it creates the ides that they are civilised people and have a good reputation is also developed.

Another quotation on page 10 shows that Mr Birling is selfish and doesn’t believe in socialists. Where everybody should look after themselves and others. Mr Birling shows this when he says ‘By the way some of these cranks talk and write now, you’d think everybody has to look after everybody else, as if we were all mixed up together like bees in a hive-community and all that nonsense.’ It creates tension because he doesn’t believe in socialism so he only knows or cares about himself and his own family. This kind of attitude seems dated and traditional, it can be linked to Margaret Thatcher said in 1987. She said “There is no such thing as society. There are individual men and women, and there are families.” This saying means that everyone should look after themselves and there is no society.

During Act One there is an event that disturbs the relaxed atmosphere. This takes place when an inspector arrives at the Birling house.

The entrance of the inspector is shown to the audience by a doorbell. ‘We hear a sharp ring of a front doorbell,’ this doorbell interrupts the relaxing atmosphere because it’s sharp and when people hear it, it interrupts their actions. To create tension a new character is expected to be introduced. It links to Inspector Goole’s approach and attitude because it intrudes on the family, as does the inspector style of questioning.

Mr Birling is very surprised by an inspector arriving at the door when he says ‘An inspector? What kind of inspector?’ This shows that Mr Birling is frightened to see that someone is looking for him in the middle of a joyful event. This disturbs the relaxed atmosphere because everyone in the family is forced to change from being relaxed to curious. This also adds tension because all the characters are curious to see who it is, this takes place when the bell rings and Edna comes in. When Mr Birling seems surprised it shows that he is worried about something, and makes him look suspicious towards the audience.

The stage direction that is used to describe the inspector’s entrance is ‘The inspector need not be a big man, but he creates at once an impression of massiveness and purposefulness’ and ‘He speaks carefully, weightily and has a disconcerting habit of looking hard at the person he addresses before actually speaking.’ These stage direction’s interrupt the relaxed atmosphere because they make the inspector seem like a threatening and influential figure that brings fear to the family. It also brings tension because as soon as the bell rings, just before the family are very curious to see who it is. When they find out it’s the inspector, they become more frightened and tension is built.

Inspector Goole contributes to the tense atmosphere throughout the play. In the beginning of the play he says ‘Two hours ago a young woman died in the infirmary. She’d been taken here this afternoon because she’s swallowed a lot of strong disinfectant, Burnt her inside out, of course’ when he is talking about Eva’s death. This describes the death as a slow and painful death, also he is very graphic on the description. Also it tells us the reason why the inspector calls at the Birling house.

When the inspector conducts his enquiry, he is determined to speak to each person separately in an organised and fair way. An example of this is when he says ‘It’s the way I like to work. One person and one line of enquiry at a time. Otherwise there’s a muddle.’

When the inspector shows the photograph to each person separately, this builds tension because the person may feel guilty and no-one to relate to discuss their feelings. The stage direction expresses this ‘Inspector takes a photograph, about photograph size, out of his pocket and goes to Birling. Both Gerald and Eric rise to have a look at the photograph, but the inspector interposes himself between them and the photograph.’

Another way in which the inspector adds to tense atmosphere is by his name. The name Goole reminds of the mysterious word ‘ghoul’. This word conveys sinister and mysterious spirit associated with death, This is related to his purpose in the play which is to do an investigation about a girl’s death. And by the end of the play the characters are confused to whether he was a man or a ghost, who act as a conscience for the characters. This also adds to the writer’s aims which were to get the idea that people should care about others in society. The inspector could symbolise the guilt which haunts people when they know they are in the wrong.

There are many examples in the play that show different reactions to the Inspector. Mr Birling says ‘We were having a nice little family celebration tonight. And a nasty mess you’ve made of it now, haven’t you?’ This shows that Birling is not at all happy that the inspector has come to his house. He shows anger and distress through this speech.

Another speech by Birling ‘Look here Inspector, I consider this uncalled for an officious. I’ve half a mind to report you.’ This shows a lot of anger within Mr Birling it seems like it is building up and he is starting to hate the inspector. It shows the discomfort of Mr Birling in the presence of the inspector. He seems to be hiding something and may be worried that inspector might get out of him.

When Sheila says ‘Well, Gerald?’ she is trying to point the inspector attention towards Gerald. This shows that she might be hiding something too. She is also showing fear of the inspector as well as Mr Birling.

Another view of Sheila would be that she seems to be sympathetic towards Eva smith’s death when she says ‘Oh-how horrible. Was it an accident?’ This also is shows that she starts to care, and she also then starts asking more questions to know more about the girl. This is a contrast to the quotation mentioned above.

In one of Birling long speeches, He says that the titanic is unsinkable and the Germans didn’t want war. Both of these theories are wrong because the titanic sank in 1912 and World War One started in 1914 (two years later). The play was written both World Wars were over. This gives the reader dramatic irony. The lack of understanding of worldly affairs shows that Mr Birling lacks knowledge and understanding about his family too. This can also lead to the surprise reactions of Eva smith’s death. The irony would have been effective because the audience knew that the future and what actually happened.

When Mr Birling says ‘Still, I can’t accept any responsibility,’ it shows that he is dismissing any accusations against him and doesn’t accept being responsible. He later feels that he also had a part to play in the death of Eva smith.

Priestly integrated social and moral messages into the play. Priestly himself was from a working class background and wanted to convey the idea that working people like Eva Smith in the play were being exploited by people like Mr Birling. He had the idea that employers shouldn’t treat their workers harshly.

When Mr Birling says ‘A man has to make his own way-has to look after himself-and his family too,’ this shows that Mr Birling is self minded and Priestly is showing through this character that people should not only look after them but to look after all other people around them.

A contrasting quotation would be ‘But these girls aren’t cheap labour-they’re people.’ This is said by Sheila on page 19, it shows that everyone has their own rights and should be treated no different from others. This also is stated through the Inspector when he says ‘I’ve often thought that it would do us all a bit of good if sometimes we tried to put ourselves in the place of these young women.’

This play has some good ideas behind it that I quite liked. The idea that all people should be equal was one of the main ones brought through the main plot of the play. I think that the Inspector in a way represents justice or truth in the play.

Priestly does create tense moments in the play and this would be done to make the plot more interesting and to keep the audience alert. I would say the most effective moment of tension is where the Inspector rings the door and comes into the play. This is because no-one is expecting this and it builds a lot tension.