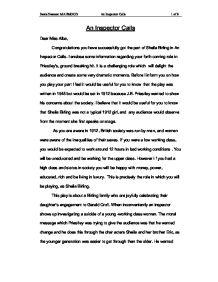 An Inspector Calls Dear Miss Alba, Congratulations you have successfully got the part of Sheila Birling in An Inspector Calls. I enclose some information regarding your forth coming role in Priestley's, ground breaking hit. It is a challenging role which will delight the audience and create some very dramatic moments. Before I inform you on how you play your part I feel it would be useful for you to know that the play was written in 1945 but would be set in 1912 because J.B. Priestley wanted to show his concerns about the society. I believe that it would be useful for you to know that Sheila Birling was not a typical 1912 girl, and any audience would observe from the moment she first speaks on stage. As you are aware in 1912, British society was run by men, and women were aware of the inequalities of their sexes. If you were a low working class, you would be expected to work around 12 hours in bad working conditions. You will be uneducated and be working for the upper class. However if you had a high class and status in society you will be happy with money, power, educated, rich and be living in luxury. This is precisely the role in which you will be playing, as Sheila Birling. ...read more.

You should be seated down on your chair looking at your hands remorsefully while the cast and the audience are watching. However when you say, "I'll never, never do it again to anybody" (page 24). You should jump out of your seat and look at your family as well as the inspector to show how you truly feel. I also want you to say your lines extremely sadly especially when you say, "So I'm really responsible" (page 23). In order to show how miserable you are I would like you to look at the people on the stage and then onto the ground, representing that you are truly sorry. You should look concerned and distressed. Your right hand is wiping away tears as you begin to cry. J .B Priestley is showing us that Sheila is willing to accept her responsibilities. The audience would also see Sheila becoming less selfish and is thinking about others for a change. Another drastic change in Sheila is when Sheila realizes that Gerald was involved with Eva Smith also known as Daisy Renton in Act two. At this point in the play, Sheila should wear no make-up and jewellery to represent that she has moved away from her materialistic manner. You should convey this by giving your engagement ring back to Gerald angrily yet sympathetically for instance when you say, "Gerald, I think you'd better take this with you". ...read more.

You have got to show your family as well as the audience that you have faced your responsibility and well as learning from this experience. To finish off you should look repentant to everything that has happened and be ashamed. I want you to know that Sheila is less of a girl of her time in the end of the play. She becomes a mouthpiece of Priestley by challenging her family. J.B Priestley makes Sheila express her ideas just like the inspector. At the end of Act three J.B. Priestley uses another dramatic technique, which was a cliff hanger. When the phone rings and Mr Birling picks up the phone, and tells everyone what has happened. I want you to look like you are not surprised because, after all you were the first person to realize that the inspector was a fake. Then to finish of I want you to look at your parents appallingly with a disgusted face and then the stage would go black and the curtain closes. In conclusion to this I hope you realize that Sheila has become a wiser person. She has changed a great deal. Her social conscience has been awakened and the person that she was at the beginning of the play has vanished forever. She is changed. I look forward from hearing from you soon. Your sincerely Razia Nasreen Mahmood Director ?? ?? ?? ?? Razia Nasreen MAHMOOD An Inspector Calls 1 of 8 ...read more.