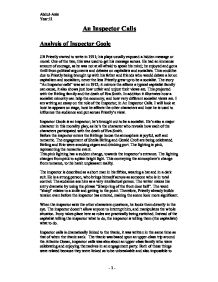 An Inspector Calls Analysis of Inspector Goole J.B Priestly started to write in 1911; his plays usually exposed a hidden message or moral. One of the two, this was used to get his message across. He had an immense amount of courage, as he was not at all afraid to speak his mind; he enjoyed and got a thrill from political arguments and debates on capitalists and socialists. This could be due to Priestly being brought up with his father and friends who would debate a lot on capitalism and socialism, never the less Priestly grew up to be a socialist. The story "An Inspector calls" was set in 1912; it mirrors the affects a typical capitalist family can cause, it also shows just how unfair and unjust their views are. This projected with the Birling family and the death of Eva Smith. In addition it illustrates how a socialist minority can help the economy, and how very different socialist views are. I am writing an essay on the role of the Inspector, in An Inspector Calls. I will look at how he appears on stage, how he affects the other characters and how he is used to influence the audience and put across Priestly's view. Inspector Goole is an inspector; he's brought out to be a socialist. He's also a major character in this morality play, as he's the character who reveals how each of the characters participated with the death of Eva Smith. ...read more.

Gerald, the next victim to be inspected, is engaged to Sheila and is said to be more or less exactly like her father, a greedy, ruthless and ambitious businessman. For example when the inspector talks about Eva Smith being sacked from Mr Birling's factory, Gerald agrees with what Mr Birling did. Birling says "If you don't come down sharply on some of these people, they'd soon be asking for the earth". Gerald instantly agrees with him "I should say so". He is then brought in to the conversation when the Inspector declares "she changed her name to Daisy Renton". The inspector had now caught him out and was determined to catch Gerald out in his lies which were soon to be exposed. As soon as the Inspector said the name Daisy Renton, Gerald's reaction showed he was aware of that name. He was startled "What", then going on to say "Do you mind if I give myself a drink, Sheila?", to escape the intensity of the inspector. This immediately gave the Inspector a chance to put Gerald through the test, as his guilty conscience finds him out. As soon as he left Sheila the Fianc� of Gerald got curious and was eager to know, how he knew Eva Smith or in other words Daisy Renton. The look on Gerald's face when the inspector mentions the name of daisy Renton gave away his secret to Sheila. ...read more.

Priestly was a socialist; a socialist is equality and fairness between everyone. A socialist person is equal to everyone. Birlings view is very different to priestly i.e: the rich stay rich or get richer, the poor stay poor or get poorer. By priestly creating characters like the Birlings and making them look bad, he is saying everyone should be equal and should share the wealth of the country. The message is directed at the reader to inform them about both socialist and capitalist people in today's society. The word ghoul has two meanings, one is a person with interests the other is demon that eats corpses. I believe the inspector is a ghoul (the first definition). This is mainly because he is an unknown character and no one seems to know him, also he just at the end he just disappears. The play can be watched in two ways, one way would be to entertain. The other is to inform people about both capitalism and socialism. The play was also created for people to understand the consequences that may occur with a capitalist attitude. This play made me understand more about a capitalist's livelihood, the play also showed me how selfish and prejudge able they are. It also informed me how very different the attitudes of a capitalist and socialists are. But furthermore to look out for the Eva's in the world. The play's aim to enlighten society, of how negative a capitalist view can be was successful. What's more it was both enjoyable and knowledgeable. ?? ?? ?? ?? Abdul-Aziz Year:11 - 1 - ...read more.