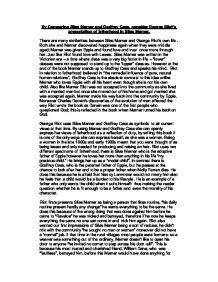 By Comparing Silas Marner and Godfrey Cass, consider George Eliot's presentation of fatherhood in Silas Marner. There are many similarities between Silas Marner and George Eliot's own life. Both she and Marner discovered happiness again when they were middle aged; Marner was given Eppie and found love and trust once more through her. Just like Eliot found love with Lewes. Silas Marner was written in the Victorian era - a time where class was a very big factor in life - "lower" classes were not supposed to stand up to the "upper" classes. However at the end of the book Marner stands up to Godfrey Cass and speaks his mind. Eliot in relation to fatherhood believed in "the remedial influence of pure, natural human relations", Godfrey Cass is the absolute contrast to this idea unlike Marner who loves Eppie with all his heart even though she is not his own child. Also like Marner Eliot was not accepted into the community as she lived with a married man but once she moved out of his home and got married she was accepted again, Marner made his way back into the community by Eppie. Moreover Charles Darwin's discoveries of the evolution of man affected the way Eliot wrote the book as Darwin was one of the first people who questioned God; this is reflected in the book when Marner turned his back on God. ...read more.

He does get what he deserved from marrying Molly Farren and not owning up to the fact that Eppie is his daughter. When Godfrey Cass and his brother are talking in front of the fire Eliot's tone is quite sarcastic when Dunstan is talking. "Well, master Godfrey" he has no respect for his older brother and knows that he can manipulate Godfrey into doing what he wants. Fireplaces make a room warm and cosy, but Godfrey Cass has his back to the fire like he does not want its warmth and does not want to really be in there with Dunstan. The Cass family is damaged they are missing a women around the house "the squire's wife had died" Godfrey is missing love and care which he probably got from his mother, and it does not seem like his father has taken over the role of looking after his children properly. Silas Marner lets Eppie make her own decisions at the end of the book when Godfrey Cass comes to claim Eppie as his own Marner lets her decided where she whether to stay or go. "Speak to the child". He knows he might loose her but still gives her a choice. Godfrey Cass although not actually looking after Eppie he still cared about her and I think is why he wanted her back at the end. ...read more.

Marner lets Eppie choose whether to go with Godfrey or not I don't think this is so much Eliot standing up for women here but Eliot wanting to show how strong Silas Marner's love for Eppie is that if she wanted to go with Godfrey Cass then he would have let her. Today's world has changed immensely from when George Eliot wrote her book but she does still have a relevance to today's parenting. We now have far more adoptive parents who love their children so much sometimes more than the maternity parents. She also raises some valuable points about how to parent; its not how much money you have or what class your in but how much you care and love your child. The roles of the modern mother and father have changed there is not as much discipline or respect around for your parents in most cases. Even though Eppie did not see Godfrey Cass as her father he did come clean about it and try and make it up to her, but once she said she wanted to stay with Marner he was heartbroken but still let her go, which is the same thing that Marner did before letting her make her own decision; both Marner and Godfrey Cass recognised what is best for Eppie. So in conclusion I think we can learn a lot from parenting from not only George Eliot but her characters Godfrey Cass and Silas Marner. By Emily Carlyle 10P1 ...read more.