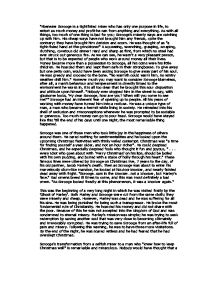 Christmas Carol Ebenezer Scrooge is a tightfisted miser who has only one purpose in life, to extort as much money and profit he can

"Ebenezer Scrooge is a tightfisted miser who has only one purpose in life, to extort as much money and profit he can from anything and everything. As with all things, too much of one thing is bad for you; Scrooge's miserly ways are catching up with him. His cheap ways have not brought him any friends, quite the contrary; they have brought him derision and scorn. He was thought of as "a tight-fisted hand at the grindstone!" A squeezing, wrenching, grasping, scraping, clutching, covetous old sinner! Hard and sharp as flint, from which no steel had ever struck out generous fire. As we can see, he wasn't a very pleasant person, but that is to be expected of people who work around money all their lives. Money became more than a possession to Scrooge, all his coins were his little children. He hoarded them and kept them safe in their strongboxes. To give away but one petty coin, would have been asking Scrooge to give away part of his soul. He was greedy and crooked to the bone. "No warmth could warm him, no wintry weather chill him." ...read more.

This sentence helps to reinforce our views that Scrooge was mean-hearted. His bad looks were enough to inspire dislike towards him. Dickens was in a descriptive frenzy "Marley in his pigtail, usual waistcoat, tights and boots; the tassels on the latter bristling, like his pigtail, and his coat-skirts, and the hair upon his head. The chain he drew was clasped about his middle. It was long, and wound about him like a tail." The descriptions that Dickens uses are intense as they show the presentation of the character. Dickens goes into tremendous detail concerning the food around the Ghost of Christmas Present. He wants us to really be there, to taste the gravy, and smell the pies. He wants us to become part of the story, not just readers. Dickens uses powerful vocabulary to involve us. "Heaped up on the floor, to form a kind of throne, were turkeys, geese, game, poultry, brawn, great joints of meat, sucking-pigs, long wreaths of sausages, mince pies, plum-puddings, barrels of oysters, red-hot chestnuts, cherry-cheeked apples, juicy oranges, luscious pears, immense twelfth-cakes, and seething bowls of punch, that made the chamber dim with their delicious steam." ...read more.

I will do it if you let me live." Scrooge has become friendly. He calls out. "Boy! Hallo! Whoop, Hallo there!" "My fine fellow!" He probably never even thought of calling anyone his fine fellow, let alone having done it. "An intelligent boy, delightful boy, what a pleasure to talk to him!" Scrooge has complimented someone for possibly the first time in his life. The warm feeling it gives him of being able to inspire happiness in others convinces him that Christmas should be a happy time, even for the less fortunate. So, without further delay, he buys a huge turkey and sends it over to Bob Cratchit's house. Deep down, beneath that bleak exterior - "Scrooge was a greedy, mean and cold-hearted person with no compassion for anything or anyone but himself!" - there was a human heart beating, and human feelings lurked beneath the surface. They were well hidden from view, but they were struggling to escape. His transformation is remarkable; he saved himself from a life without love and without friends, by finally opening up and facing his paranoia and fears. He thought that showing any weakness would destroy him; he thought that showing compassion would demean him, he thought that he could survive on his own in a world where everyone depends on everyone else. He was wrong on all three counts.". ...read more.