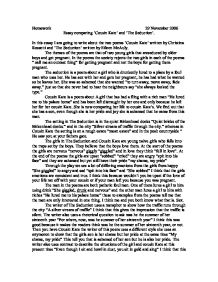 Homework 29 November 2006 Essay comparing 'Cousin Kate' and 'The Seduction'. In this essay I am going to write about the two poems 'Cousin Kate' written by Christina Rossetti and 'The Seduction' written by Eileen McAuly. The themes of the poems are that of two young girls that areseduced by older boys and get pregnant. In the poems the society rejects the two girls in each of the poems " call me an outcast thing" for getting pregnant and not the boys for getting them pregnant. The seduction is a poem about a girl who is drunkenly lured to a place by a foul man who uses her. He has sex with her and gets her pregnant, he has had what he wanted so he leaves her. She was so ashamed that she wanted "to turn away, move away, fade away." ...read more.

They believe that the boys love them. At the start of the poems the girls are nervous "nervous" giggly "giggled" and in love they think "fell in love". At the end of the poems the girls are upset "sobbed" "cried" they are angry "spit into his face" and they are ashamed but yet still have their pride "my shame, my pride" Through the play we see a lot of differing emotions from the girls from happy "She giggled" to angry and sad "spit into his face" and "She sobbed" I think that the girls emotions are consistent and true. I think this because wouldn't you be upset if the love of your life ran off with your cousin or if your man left you because you was pregnant. The men in the poems are both pathetic foul men. ...read more.

The writer also uses contrast to describe the situations of the girl and cousin Kate at this present time "Even though I sit and howl in dust, you sit in gold and sing" I think that this shows you that the girl is jealous of what her cousin has now got. I also think that she is comparing her life with cousin Kate's. My personal feeling about the plays are that the men that lured the girls are pathetic and desperate. This was a new experience for the girls and they thought they were in love so they did not realise what was happening to them. I do think that they should have been more careful and I do think that they are not totally innocent. I think that the poems sent out a good message for young girls. ...read more.