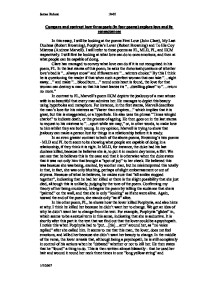 Compare and contrast how three poets (in four poems) explore love and its consequences.

Compare and contrast how three poets (in four poems) explore love and its consequences In this essay, I will be looking at the poems First Love (John Clare), My Last Duchess (Robert Browning), Porphyria's Lover (Robert Browning) and To His Coy Mistress (Andrew Marvell). I will refer to these poems as FL, MLD, PL, and HCM respectively. I will first be looking at what love can do to ones emotions, and then at what people can be capable of doing. Clare has managed to convey what love can do if it is not recognised in his poem, FL. In the last stanza of this poem, he asks the rhetorical questions of whether love's bed is "...always snow" and if flowers are "...winters choice." By this I think he is questioning the reader if that when such a perfect woman that can take "...sight away..." and make "...blood burn..." ...read more.

In MLD, for instance, the duke had his last duchess killed, because he believes she is, to put it in modern day terms, a flirt. We can see that he believes this is the case and that it is otherwise when the duke states that it was not only him that brought a "spot of joy" to her cheek. He believed this was because she was being, excited, by another man, but he misinterpreted this totally in that, in fact, she was only blushing, perhaps of slight embarrassment or out of shyness. Because of what he believes, he makes sure that "all smiles stopped together", indicating that he had her killed or there is the slight possibility that she just died, although this is unlikely, judging by the tone of the poem. Confirming my theory of her being murdered, he begins the poem by telling the audience that she is "painted" on the wall, and that she is only "looking" as if she were alive. ...read more.

He then states that he "found" a thing to do. This is then written almost blatantly - that he used her hair and wound it round her neck three times in one "long yellow string" and "strangled" her. He then sickens the reader by saying that he was "quite" sure that she didn't feel any thing, but it seems by this that he doesn't even care. Now the reader can be disgusted by his next action, he unties her, and her cheek blushed bright beneath his "burning kiss". Thus he discloses to the reader the prospect that he is a necrophiliac, and that he may only feel emotions toward dead people. As an evaluation to all of the above, it becomes apparent that Clare and Marvell both express what happens to peoples emotions due to love, but Browning delves deeper than this to explore what crazed lovers can do to their partners. 835 Words. James Hudson 10-05 1/5/2007 ...read more.