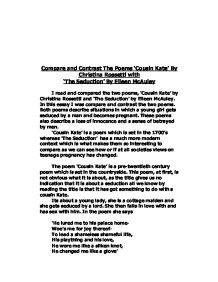 Compare and Contrast The Poems 'Cousin Kate' By Christina Rossetti with 'The Seduction' By Eileen McAuley.

Compare and Contrast The Poems 'Cousin Kate' By Christina Rossetti with 'The Seduction' By Eileen McAuley I read and compared the two poems, 'Cousin Kate' by Christina Rossetti and 'The Seduction' by Eileen McAuley. In this essay I was compare and contrast the two poems. Both poems describe situations in which a young girl gets seduced by a man and becomes pregnant. These poems also describe a loss of innocence and a sense of betrayed by men. 'Cousin Kate' is a poem which is set in the 1700's whereas 'The Seduction' has a much more modern context which is what makes them so interesting to compare as we can see how or if at all societies views on teenage pregnancy has changed. The poem 'Cousin Kate' is a pre-twentieth century poem which is set in the countryside. This poem, at first, is not obvious what it is about, as the title gives us no indication that it is about a seduction all we know by reading the title is that it has got something to do with a cousin Kate. Its about a young lady, she is a cottage maiden and she gets seduced by a lord. ...read more.

As the poem progresses it becomes more hatred, in the beginning the poem isn't all 'happy happy' but it isn't as angry as it is nearer the end. The poem rhymes and the use of punctuality makes it easy to read. The setting of the poem 'The Seduction' is - Birkenhead docks- where the seducer leads the girl and the way it is described is almost chilling. The words such as 'frightening scum' and 'septic wound' are both effective and frightening. The first few lines of the poem immediately give us an impression of what the seducer is doing and exactly what the scene is like. The poem 'The Seduction' is about a young girl who gets seduced by a boy she meets at a party. For the first part of the poem, the young girl is drunk and unaware of what is happening. In the poem the writer constantly reminds you of innocence that is the girl with words like 'giggle', 'high white shoes' and 'wide blue eyes' whereas the seducer is obviously less innocent as depicted with the use of phrases such as- ' he swiftly contrived to kiss her', 'He spat into the river', 'muttered little slag' and 'eyes as blue as iodine'- which is particularly effective in the way it contrasts the innocent image which is what the girl can see and reality. ...read more.

Both poems express a loss of innocence and betrayal from men, but the issue of who's to blame in each poem is very different. When first looking at the poem 'Cousin Kate' it is not obvious what the poem is about whereas 'The Seduction' gives an indication of what the poem is about. Both poems have short, sharp titles. Both poems are excellently written, but I think that 'The Seduction' is the better one of the two, as it is more realistic and the words used are more dramatic. I think that the attitude to teenage pregnancy has not changed because in both poems, which are written in pre-twentieth and late twentieth, that the attitude is basically the same and the fear that they both feel about what people say about them. Also there is the same point in the poems that it is the girls are ones seen as dirty and that 'type'. The men in both poems don't seem to have been made to accept their responsibilities, because it is also their child. But society, as shown in these poems has always left the woman to take all the blame, responsibility and comments from other people. By Angharad Lucas 11s1 Ms George. ...read more.