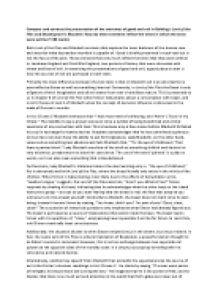 Compare and contrast the presentation of the extremes of good and evil in Goldings Lord of the Flies and Shakespeares Macbeth. How do these extremes reflect the times in which the texts were written?

Transfer-Encoding: chunked ﻿Compare and contrast the presentation of the extremes of good and evil in Golding?s Lord of the Flies and Shakespeare?s Macbeth. How do these extremes reflect the times in which the texts were written? (30 marks) Both Lord of the Flies and Macbeth are texts that explore the inner darkness of the human race and describe what depravities mankind is capable of. Good is briefly presented in each text but is not the focus of the plot. These are texts that very much reflect the times that they were written in: Jacobean England and Cold War England, two periods of history that were shrouded with threat and fear of evil. In examining the presentations of good and evil, a good place to start is how the sources of evil are portrayed in both texts. Primarily the main difference between the two texts is that in Macbeth evil is an external force personified as Satan as well as something internal. Conversely, in Lord of the Flies the Beast is only a figment of their imagination and all evil stems from man?s hereditary nature. This is presented to us in chapter 8 of Lord of the Flies when Simon hallucinates about a conversation with beast, and in Act 2 Scenes 2 and 3 of Macbeth when the concept of demonic influence is discussed in the wake of Duncan?s murder. In Act 2 Scene 2 Macbeth bemoans that ?I had most need of a blessing, and ?Amen? / Stuck in my throat.? The inability to say a prayer was seen to be a symbol of being bewitched and a total severance of any connection with God. ...read more.

The name Simon could also point to Simon of Cyrene, who carried the cross for Christ and helped him with his burden, in the way that Simon helps both the little ones and Piggy with their struggles. Likewise, in Macbeth Banquo is also presented as a good man when everyone around him is encompassed by evil. This much is illustrated in Act 2 Scene 3 when he states that, ?In the great hand of God I stand.? Shakespeare?s use of religious imagery is much bolder than Golding?s, but both authors use it to the same effect: creating a sense of good. In page 188, leading up to Simon?s murder, we are told that, ?The dark sky was shattered by a blue-white scar.? Golding?s use of pathetic fallacy foreshadows what evil is about to take place, as storms represent turmoil and violence. Similar pathetic fallacy is used in Macbeth in Act 2 Scene 1, when Banquo remarks that, ?There's husbandry in heaven; / Their candles are all out,? implying that the stars have gone out and Scotland has been plunged into impenetrable darkness. The effect of darkness on the audience is that it creates an atmosphere of suspense and foreboding, hinting at the evil that is to come. This evil is displayed when we see Macbeth meditating the murder of his closest friend in Act 3 Scene 1. Macbeth recognises that if Banquo is allowed to live he will always be a threat to him, for his, ?dauntless temper,? and his, ?wisdom,? far surpass that of Macbeth. He continues to deplore that, ?Only for them; and mine eternal jewel / Given to the common enemy of man.? If Macbeth does not dispose of Banquo he will have defiled his mind for nothing, as it will all be to Banquo?s benefit. ...read more.

The ending of Lord of the Flies, although ultimately hopeful, is more pessimistic in its wording. We are told that, ?Ralph wept for the end of all innocence.? Even though good has been brought to them, Ralph acknowledges that what has happened on the island can never be undone, and they will all have to battle with the memories for the rest of their lives. Golding rejected the accusation that his book was pessimistic. He said, ?I think good will overcome evil in the end. I don?t quite know how but I have that simple faith.? World War II was finally over, Japan had surrendered. Good had triumphed. However, just like in Lord of the Flies, that victory had a hollow ring. Thousands of civilians had to be murdered by nuclear weapons before the militant Japanese government put down its arms. The world had very much witnessed, ?the end of all innocence.? Likewise, at the time of Shakespeare?s writing Guy Fawkes and his men had been executed and good held the upper hand in England ? if the emasculation and quartering of criminals can really be considered ?good?. Both texts show the reader that good cannot overcome evil without considerable loss and anguish. To conclude, both texts present the extremes of good and evil in keeping with the times that they were written in. Both give a clear message: evil is extremely powerful, but good will always triumph. Arguably Golding?s presentation of evil is more extreme than Shakespeare?s, because Golding uses pre-pubescent boys as his antagonists with no previous exposure to violence, whereas in Shakespeare the antagonist is a seasoned warrior with plenty of killing experience. Both texts issue a stern warning to humanity about controlling our desires. ...read more.