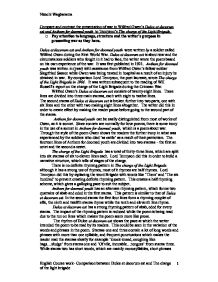 Compare and contrast the presentation of war in Wilfred Owen's Dulce et decorum est and Anthem for doomed youth to Tennyson's The charge of the Light Brigade.

Compare and contrast the presentation of war in Wilfred Owen's Dulce et decorum est and Anthem for doomed youth to Tennyson's The charge of the Light Brigade. * Pay attention to language, structure and the writer's purpose in presenting war as they have. Dulce et decorum est and Anthem for doomed youth were written by a soldier called Wilfred Owen during the First World War. Dulce et decorum est is about war and the circumstances soldiers who fought in it had to face, the writer wrote the poem based on his own experience of the war. It was first published in 1921. Anthem for doomed youth was written in (year) with assistance from Wilfred Owen's fellow soldier Siegrfried Sasson while Owen was being treated in hospital as a result of an injury he obtained in war. By comparison Lord Tennyson, the poet laureate, wrote The charge of the Light Brigade in 1964. It was written subsequent to the reading of WH Russell's report on the charge of the Light Brigade during the Crimean War. Wilfred Owen's Dulce et decorum est consists of twenty-eight lines. These lines are divided into three main stanzas, each with eight to twelve lines. The second stanza of Dulce et decorum est is broken further into two parts, one with six lines and the other with two making eight lines altogether. The writer did this in order to create effect by making the reader pause before going to the second part of the stanza. Anthem for doomed youth can be easily distinguished from most of works of Owen, as it is sonnet. Since sonnets are normally for love poems, there is some irony in the use of a sonnet in Anthem for doomed youth, which is a poem about war. Through the style of the poem Owen shows the readers the further irony in what was experienced by the soldiers who died 'as cattle' as a result of their patriotism. ...read more.

The dimness would have been due to the 'thick green light', brought about by the 'green sea' of 'gas'. Showing us that the gas was poisonous chlorine 'gas' because poisonous chlorine 'gas' is green. Owen also uses a lot of Juxtaposition in Anthem for doomed youth. He constantly compares and contrasts the loud noises and nature of funerals that soldiers got in war fronts to the traditional Victorian funeral. For example he uses simile to juxtapose 'the monstrous' gun shots and 'rapid rattle' of stuttering rifles which the soldiers who died 'as cattle' received during their burial to the 'passing bells', 'prayers', and 'voice of mourning' which they deserved for fighting and dieing for their country but where denied due to the conditions in the war which they died in. Most of the imagery in Anthem for doomed youth create noise and sound metaphors as opposed to Dulce et decorum est where the imagery created was mainly vision and touch based. An example of this could be found in the first stanza where he described the sounds of the 'riffles' as 'stuttering' and the 'shells' 'wailing'. In The charge of the Light Brigade, Tennyson also creates imagery not by using mostly visual imagery, through connotations as Owen did but by using some clich� imagery, which allows connotations and also by using a lot of denotation, which lets most of the words, have their actual dictionary meaning. Some examples of clich� imagery in the charge of the light brigade are 'jaws of Death', 'Mouth of Hell' and 'Valley of death' these phrases allows the reader imagine the fatality that soldiers charged into by connoting the words in the phrase to their cultural meaning which the readers may not be able to picture clearly because they haven't seen it before but have an idea of what it would look like. 'Forward the Light Brigade' 'Charge for the guns' these commands carry their actual dictionary meanings. ...read more.

This explains why Tennyson did not focus on the blunder but on the courage of the 'Light brigade'. Hence he reminds the audience that though the 'Brigade' was defeated they had 'fought so well' that the entire 'world' should wonder weather thier glory would ever 'fade'. He ends the poem by telling the audience to 'Honour the Light Brigade, Noble six hundred!' for 'the wild charge they made!' in spite of the fact that they were defeated. Anthem of the doomed youth was written to inform its readers about the way soldiers died, the type of funeral they received and to give answers to some questions like 'What passing bells' were rung 'for' the soldiers? 'What candles' were held to say good-byes?' which people in the public who lost their family in war and never had a chance to say good bye properly as they where not present in the funerals may have been yearning to be answered. Wilfred Owen wrote Dulce et decorum est for an audience who were either propagandists or victims of propaganda. Most of his audience were ignorant of the reality of warfare due to the fact that the information given to them about war was repressed in order to encourage more people to join the army. As a result of that Wilfred Owen gave a detailed description of what the soldiers went through in war and also discouraged the propagandist who told 'with such high zest ... Dulce et decorum est Pro patria mori' which when translated from Latin to English means It is sweet and honourable to die for your country. The Latin statement 'Dulce et decorum est Pro patria mori' is an irony when compared to the way 'someone' in the poem suffered and died 'bitterly' from the 'green sea of gas'. Thus we can see that both writers presented war with in different ways in order to fulfil their purpose and suit their audience. Nkechi Wagbaranta 1 English Course work- Comparison between Dulce et decorum est and The charge of the light brigade ...read more.