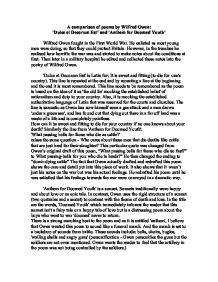 A comparison of poems by Wilfred Owen: 'Dulce et Decorum Est' and 'Anthem for Doomed Youth'.

A comparison of poems by Wilfred Owen: 'Dulce et Decorum Est' and 'Anthem for Doomed Youth' Wilfred Owen fought in the First World War. He enlisted as most young men were doing, so that they could protect Britain. However, in the trenches he realised how horrific the war was and started to make notes about the conditions at first. Then later in a military hospital he edited and collected these notes into the poetry of Wilfred Owen. 'Dulce et Decorum Est' is Latin for: It is sweet and fitting (to die for one's country). This line is repeated at the end and by repeating a line at the beginning and the end it is most remembered. This line needs to be remembered as the poem is based on the idea of it as 'the old lie' mocking the established belief of nationalism and duty to your country. Also, it is mocking the established authoritative language of Latin that was reserved for the courts and churches. The line is sarcastic as Owen has now himself seen a gas attack and a man drown 'under a green sea', and has found out that dying out there in a far off land was a waste of a life and is completely pointless. ...read more.

Owen wants the reader to feel that the artillery in the poem was not being controlled by the soldiers.) 'Dulce,' on the other hand, is written in free verse with an alternate line rhyming pattern. It uses similes such as 'like old beggars under sacks' and 'Bitter as the cud'. In contrast to this view Rupert Brooke's poem 'The Soldier' he makes it seem very honourable to die for your country, so we can see that not all views were the same as Owen's. Here Owen's choice of language has a supernatural theme. He uses words such as 'hags', 'devil', and 'writhing face'. This kind of description sounds like a nightmare. Someone these days will be able to wake up from such a nightmare whereas in those days this nightmare was reality for a lot of young men. 'Anthem' asks a question at the beginning of each stanza, which it then answers through the rest of that stanza. Owen does this to approach a poem from a different prospective. By asking a question, he gets the reader thinking before answering himself. It causes tension and sadness because the answer to the questions we probably could answer but do not because it is upsetting to remember the dead - especially when the question implies why should it have been them and not you? ...read more.

Both poems have an alternate line rhyming scheme. 'Anthem.' uses the form of a sonnet to portray a distressing message that flows slowly as you would imagine a funeral march. 'Dulce.' also has a distressing message but is portrayed in contradiction to its title. The idea of nationalism, and much it's worth is explored. There were also many other poems that Wilfred Owen wrote which also convey the techniques used in these two poems and others. The other two poems I will look at will be 'The Send-off' and 'The Chances'. In the poem "The send-off" many vivid pictures of death are painted and I think that Wilfred Owen is trying to put forward the idea that when you are "sent off" you never come back. "A few, a few, too few for drums and yells, may creep back silent to village wells" Owen uses repetition here to stress the fact that 'too few' soldiers do actually return from the front. This really sums up the huge loss of life in the war and how much it has affected Owen as a person. In the quote "And lined the train with faces grimly gay" he uses an oxymoron 'grimly gay' to get across the feelings of the soldiers, that before war was a good thing but now the war is just a slaughterhouse for "dumb-dying cattle". ...read more.

There are some fair points made about the two poems and the essay is comparative at times. However, there is an overall lack of clarity. More considered planning and attempting to apply the point, evidence, explain structure to each point would improve the essay. There is also not enough exploration of poetic devices and their effects and there are some inaccurate assertions.

This essay is a very well-informed repsonse to the question. There is an astute understanding of the deprth of analysis required to successfully comment on both 'Dulce et Decorum est' and 'Anthem For Doomed Youth'. The candidate has displayed an ...

This essay is a very well-informed repsonse to the question. There is an astute understanding of the deprth of analysis required to successfully comment on both 'Dulce et Decorum est' and 'Anthem For Doomed Youth'. The candidate has displayed an outstanding ability to comment on specific details about the poems with regard to language, structure, imagery and audience effect. This shows examiners that the candidate is well-equiped as they consider how the reader feels when reading the poem. Factoring in a small amount of personal response does help strengthen and answer, but only in moderation (unless the question directly asks for otherwise, e.g. - "How do you respond..." etc.).

The Level of Analysis is very good here. There is a sensitive handling of how Owen uses language in order to shape his meanings, with plenty of contextualised appreciation of where the poems came from and the process Owen went through in order to perfect them (the comments on how Owen changed the words "die so fast" to "die as cattle" are evidence of external research and examiners love to see this). This kind of analysis is highly respected from a GCSE candidate as it shows they can analyse in great detail the aspects of language and how they contribute to the effect on the reader.
Comments on structure of the poems is also very good. The success behind this is because the candidate adopts the Point-by-Point analysis, rather than Poem-by-Poem, and this is good because it encourages an more actively comparative essay, linking between the poems in one single paragraph rather than
One thing this essay does not need is the information about Wilfred Owen. The question directs candidates towards the poems and not the writer. Whilst there must be appreciation of the writer's background and the context that influenced the writing, there is no need for a block biographical paragraph at the beginning of the essay - they elicit no marks and waste valuable exam time.

The Quality of Written Communication is very good, though there a few inconsistencies and irregularities than could be ironed out with a spell-check and a proof-read before submission/closing the exam booklet. One such example of where the candidate appears to make constant mistake though, is when they refer to the poems as "'Dulce'" and "'Anthem'" - this is not the standard expectation of English writing and the full title should be refertred to at all times when candidates write their answers.