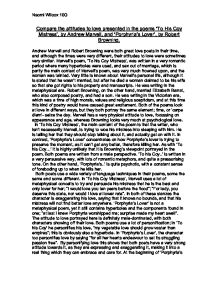 Compare the attitudes to love presented in the poems 'To His Coy Mistress', by Andrew Marvell, and 'Porphyria's Lover', by Robert Browning.

Compare the attitudes to love presented in the poems 'To His Coy Mistress', by Andrew Marvell, and 'Porphyria's Lover', by Robert Browning. Andrew Marvell and Robert Browning were both great love poets in their time, and although the times were very different, their attitudes to love were sometimes very similar. Marvell's poem, 'To his Coy Mistress', was written in a very romantic period where many hyperboles were used, and sex out of marriage, which is partly the main context of Marvell's poem, was very much frowned upon, and the woman was tainted. Very little is known about Marvell's personal life, although it is stated that he wasn't married, but after he died a woman claimed to be his wife so that she got rights to his property and manuscripts. He was writing in the metaphysical era. Robert Browning, on the other hand, married Elizabeth Barrat, who also composed poetry, and had a son. He was writing in the Victorian era, which was a time of high morals, values and religious scepticism, and at this time this kind of poetry would have caused great excitement. Both of the poems look at love in different ways, but they both portray the same element; time, or 'carpe diem'- seize the day. Marvell has a very physical attitude to love, focussing on appearance and age, whereas Browning looks very much at psychological love. ...read more.

At the beginning of 'Porphyria's Lover', there is a lot of personification of the weather, "the sullen wind was still awake", and a pathetic fallacy. It continues to say "...and did its worst to vex the lake" which, as the poem continues, is exactly what Porphyria does to the character; he is sat at home quite calmly, but when she comes in he is stirred up, like the wind whipping at the lake. The attitude to love expressed here is that when you're in love with someone everything changes as soon as they are around you. In 'To his Coy Mistress', Marvell uses a lot of persuasion to try and get his desired affect (his lady to sleep with him). Firstly, he excessively flatters her; "an hundred years should go to praise thine eyes and on thy forehead gaze" which is obviously a hyperbole, as it would be impossible to worship her eyes and forehead for 100 years. Secondly, he scares her; " Nor, in the marble vault shall sound, my echoing song; then worms shall try that long preserved virginity", basically warning her that if she doesn't hurry up and get together with him she will die a virgin because no-one will want to sleep with her when she's old and has lost her beauty. Finally, he embraces her love, saying that if they do get together they will have the best time of their lives together; "Now let us sport us while we may, and now, like amorous birds of prey". ...read more.

In the rhyming couplet at the end of 'Porphyria's Lover', the character is assuring himself that he has done the right thing by killing her; "and all night long we have not stirred, and yet God has not said a word!" this is an ambiguous statement because it could either mean that he thinks God doesn't mind as he isn't being punished or that he doesn't think God exists. I have already briefly mentioned the structure of 'To his Coy Mistress', but although it has three clear sections it may be one long stanza. In 'Porphyria's Lover', the main structure is in two stanzas, one in which Porphyria is active and the character is passive and they are then reversed in the second stanza. 'Porphyria's Lover' is octosyllabic, in lyric form, with a regular rhyme and rhythm and enjambment at the beginning. The character is also telling the story after it has happened. In 'To his Coy Mistress', the character is telling the story as it happens. In both poems, subjective thoughts are expressed. In conclusion, I think that the main attitudes to love are preserving the time the lovers have together. However, 'To his Coy Mistress' is about seizing the day and getting on with it, whereas 'Porphyria's Lover' is about seizing the moment and preserving it, even if it is in a psychotic way. ?? ?? ?? ?? Naomi Wilcox 10G ...read more.