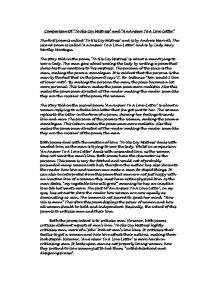 Comparison Of "To His Coy Mistress" and "An Answer To A Love Letter" The first poem is called 'To His Coy Mistress' and is by Andrew Marvell. The second poem is called 'An Answer To A Love-Letter' and is by Lady Mary Wortley Montagu. The story told in the poem, 'To His Coy Mistress' is about a man trying to woo a lady. The man goes about wooing the lady by writing a poem that shows his true emotions to 'his mistress'. The persona of the piece is the man, making the poem a monologue. It is evident that the persona is the man by the fact that in the poem it says 'I', for instance "Nor would I love at lower rate". ...read more.

The persona of the poem is the woman, making the poem a monologue. This inturn makes the poem seem more realistic. Also this makes the poem seem directed at the reader making the reader seem like they are the receiver of the poem, the man. Both poems deal with the emotion of love. 'To His Coy Mistress' deals with wanted love, as the man is trying to woo the lady. Whilst in comparison 'An Answer To A Love Letter' deals with unwanted love, as the women does not want the man's love. Both poems have the character as the persona. This poem is very far fetched and would not of probably persuaded many women into bed, therefore the author has also shown to the reader how love and women can make a man do stupid things. ...read more.

The women is not scared to speak her mind, "How vile is man!" Therefore this poem displays the power of women and how all women should be bold and independent. Basically, the intent of this poem is to criticise men and their love. Both the poems intent is to criticise men. However, both poems criticise different aspects of men's love. 'To His Coy Mistress' lightly criticises men, more of a 'joke' look at men's love lives. It criticises their tactics to get a woman and how love affects their actions, making them look stupid. However, 'An Answer To A Love Letter' is more harsh in criticising men. It looks upon men as not properly loving women, how they pretend to love women just to bed them, "artful falsehood and designing praise". ...read more.