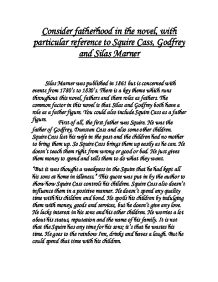 Consider fatherhood in the novel, with particular reference to Squire Cass, Godfrey and Silas Marner

Consider fatherhood in the novel, with particular reference to Squire Cass, Godfrey and Silas Marner Silas Marner was published in 1861 but is concerned with events from 1780's to 1820's. There is a key theme which runs throughout this novel, fathers and there roles as fathers. The common factor in this novel is that Silas and Godfrey both have a role as a father figure. You could also include Squire Cass as a father figure. First of all, the first father was Squire. He was the father of Godfrey, Dunstan Cass and also some other children. Squire Cass lost his wife in the past and the children had no mother to bring them up. So Squire Cass brings them up easily as he can. He doesn't teach them right from wrong or good or bad. He just gives them money to spend and tells them to do what they want. "But it was thought a weakness in the Squire that he had kept all his sons at home in idleness." ...read more.

That was in the past, but after that he met Nancy. Dunstan bribed Godfrey when he wanted something. He bribed Godfrey because he found out about Molly and Godfrey. When ever Dunstan wanted money or something he would threaten to tell Squire Cass if Godfrey didn't do what he said. "I might tell the Squire how his handsome son was married to that nice young woman, Molly Farren." So Godfrey made a decision. He decided to make a new life with Nancy. Godfrey feels his marriage with Molly was accidental. He was young and he made a mistake. He loved Nancy so very much, and he wanted to marry her. He feels she is the perfect wife and that she will make good changes in the Red House. Godfrey doesn't have the moral courage. He thinks a fathers' duty is about providing for Eppie; His child. At first Godfrey doesn't want to have children, but sixteen years later he realises life is nothing without children. ...read more.

As the money didn't love him back he has gained very valuable things. Dolly helped Silas by teaching him how to bring up a child and gave maternal input. Dolly advised Silas to punish Eppie, when she was younger, if she did anything wrong. But Silas didn't slap her or beat her because he loved her too much. But soon he understood that he is helping her if he punishes her. He soon started to put her in coal cupboard for naughty thing that she did. Eliot tells us that fatherhood is not just about providing money, it is about providing love and care and also time for your children. A good father would comply with the above. Godfrey gives up, and he will be unhappy for the rest of his life and live with the mistakes he made. Eppie must be wondering why her father claimed her now and not before. The answer to this helped her to make the decision to choose between Silas and Godfrey. "I want to stay with my father, he loves me and he bought me up." By Veenesh Halai ...read more.