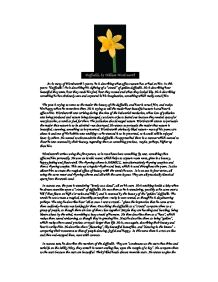 Daffodils, by William Wordsworth As in many of Wordsworth's poems, he is describing what effect nature has or had on him. In this poem- "Daffodils"- he is describing his sighting of a "crowd" of golden daffodils. He is describing how beautiful they were, how they made him feel, how they moved and what they looked like. He is describing something he has obviously seen and captured in his imagination, something which really struck him. The poet is trying to stress to the reader the beauty of the daffodils, and how it struck him, and makes him happy when he remembers them. He is trying to tell the reader how beautiful nature is and how it affects him. Wordsworth was writing during the time of the industrial revolution, when lots of pollution was being produced and nature being damaged, cut down or just cleared out because they needed space for new factories, as well as fuel for them. The pollution also damaged nature. Wordsworth wants to persuade the reader that nature is to be admired- not destroyed. He wants to persuade the reader that nature is beautiful, stunning, something to be preserved. Wordsworth obviously liked nature- most of his poems are about it and one of his hobbies was walking- so he wanted it to be preserved, so it could still be enjoyed later, by others. ...read more.

In this verse there is a run-on line and then end-stopped lines, most with commas. In stanza two, he describes the numbers of the daffodils. They are "continuous as the stars that shine and twinkle on the Milky Way, they stretch in never- ending line, upon the margin of a bay". He compares them to the stars because the stars are beautiful. Their frilled heads almost resemble stars. He wants to give the impression that there are vast numbers of them- so many that they look like they are "never-ending". He describes them as though light radiates from them- as though they glitter and grab his attention. It makes the daffodils seem like they are more beautiful than anything around them: they are the only thing you can focus on. Everything around them is inferior- they are shining, larger then life. The poet emphasises the beauty of the daffodils and how they affected him. He then describes them "tossing their heads in sprightly dance". This makes them sound quite proud, "tossing their heads" in dance, full of life. This is capturing the movement of the daffodils. In this verse there are a couple of run-on lines. This helps to build up a mood of excitement, as it makes you say faster because there is no pause at the end of the line. ...read more.

He personifies them almost to incorporate his feelings into the poem. It also gives an impression of how they moved - comparing them to something I know and have seen, so I can picture in my mind what they looked like and how they moved. I like the way he describes them as being larger than life, royal, precious, glittering like the stars. The verbs and adjectives he uses create a really clear picture in my mind. I can picture the daffodils swaying, fluttering, and dancing by the lake where the sparkling waves dance. I can picture them with a sort of glow radiating from them as they toss their petals in the breeze. I can picture the poet lying on his couch at home, remembering the daffodils. Even the image the poem creates is strong, and sticks in your mind, including how stunned he is. The words he uses really enable me to understand how the poet was feeling when he saw these daffodils, as he remembered them and how he felt towards them. I can almost feel the amazing exhilaration felt by Wordsworth as he tried to describe his sighting of the daffodils on that day as he daydreams about them, trying to create an image in words of what the looked like and how they moved. He has done this really well. I think this is a really beautiful piece of mind capturing a piece of nature- it's written really strongly. ...read more.