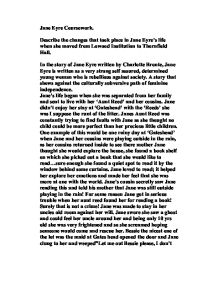 Describe the changes that took place in Jane Eyre's life when she moved from Lowood Institution to Thornfield Hall.

Jane Eyre Coursework. Describe the changes that took place in Jane Eyre's life when she moved from Lowood Institution to Thornfield Hall. In the story of Jane Eyre written by Charlotte Bronte, Jane Eyre is written as a very strong self assured, determined young woman who is rebellious against society. A story that shows against the culturally subversive path of feminine independence. Jane's life began when she was separated from her family and sent to live with her 'Aunt Reed' and her cousins. Jane didn't enjoy her stay at 'Gateshead' with the 'Reeds' she was I suppose the runt of the litter. Janes Aunt Reed was constantly trying to find faults with Jane as she thought no child could be more perfect than her precious little children. One example of this would be one rainy day at 'Gateshead' when Jane and her cousins were playing outside in the rain, as her cousins returned inside to see there mother Jane thought she would explore the house, she found a book shelf on which she picked out a book that she would like to read...sure enough she found a quiet spot to read it by the window behind some curtains. Jane loved to read; it helped her explore her emotions and made her feel that she was more at one with the world. Jane's cousin secretly saw Jane reading this and told his mother that Jane was still outside playing in the rain! For some reason Jane got in serious trouble when her aunt reed found her for reading a book! Surely that is not a crime! Jane was made to stay in her uncles old room against her will. Jane swore she saw a ghost and could feel her uncle around her and being only 10 yrs old she was very frightened and so she screamed hoping someone would come and rescue her. Bessie the nicest one of the lot was the maid at Gates head opened the door and Jane clung to her ...read more.

Inside Jane knew it was going to kill her friend eventually, how was she going to cope without her best friend, her mother figure, and most importantly the girl that welcomed Jane into her life taught her so much and now she was going to be taken away from her. Sadly Helen Burns died from her disease a few weeks later after discovering what she had, Before this Jane was determined to go and comfort her friend regardless of the fact that she could catch the disease the most important thing to Jane was to see her friend and she did! Helen told Jane not to grieve when she had gone but to make both their dreams reality, to get out in that world and explore for them both, make both their dreams come true! At the age of 16 Jane became a teacher at the institution. She wanted to help the children learn, but in a different to what she was taught. Jane taught her children with manners and kindness mostly; she made a huge difference to the institution. Jane wanted the children to fell loved and wanted the way Miss. Temple had made her feel, She wanted to make a future for her children at lowood and protect them from all types of badness including Mr.Brocklehurst!!! Jane was a teacher at Lowood for two year and when she reached the age of 18, she decided it was her time to leave. Jane applied and was accepted to a job at a household called "Thorn field Hall" for the job as a nanny to a young girl called "Adele", Adele was French and it was Jane's job to teach her the English language. Jane arrived at Thorn field Hall at about 8,o, clock at night just in time to meet everyone before they all went to bed. Thorn field was the biggest turning point in the story and most important change in Jane's life, also for the better in my opinion. ...read more.

Her love for him was unconditional and that's how it should be. She walked through to the living room with the coffee he had asked for from the maid. She gave it to him and held his hand, he knew who it was straight away he was delighted but embarrassed by the state of himself he felt he had lost all of his dignity but Jane did not see it like that, she wanted to be there for him to look after him day and night, she wanted to prove her love to him and was sorry she wasted all that time away from him when clearly he had reasons for keeping the biggest secret of his life from her. He accepted her request and they moved in together formal what it was a 'Perfect couple'. After a few months of living together they got married and to everyone's including there self's amazement produced a child, which made them the happiest people in the world. They had brought a beautiful cottage in the country in which to bring their child up. And this was brilliant it got better. Mr.Rochesters vision became to regain itself he could now see the colours of the world and his precious daughter growing up and most importantly of course his amazing wife that had helped him through everything and loved him no matter what! Surely this just shows what a miracle Jane Eyre was and how she made so many peoples lives one hundred times better than what it would be if they had never met. A story of true miracles and what seemed to be the sad life of Jane Eyre but turned out to be everything she had ever dreamed. She kept her promise she explored the world for Helen Burns and herself and if you ask me she did it so well and with so much pride and kindness. If only there were more people in the world like she. ...read more.