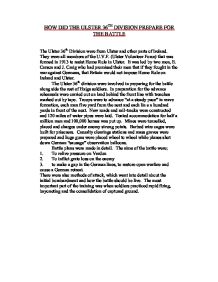 How did the Ulster 36th Division prepare for the battle

HOW DID THE ULSTER 36TH DIVISION PREPARE FOR THE BATTLE The Ulster 36th Division were from Ulster and other parts of Ireland. They were all members of the U.V.F. (Ulster Volunteer Force) that was formed in 1913 to resist Home Rule in Ulster. It was led by two men, E. Carson and J. Craig who had promised their men that if they fought in the war against Germans, that Britain would not impose Home Rule on Ireland and Ulster. The Ulster 36th division were involved in preparing for the battle along side the rest of Haigs soldiers. In preparation for the advance rehearsals were carried out on land behind the front line with trenches marked out by tape. Troops were to advance "at a steady pace" in wave formation, each man five yard from the next and each line a hundred yards in front of the next. New roads and rail-tracks were constructed and 120 miles of water pipes were laid. ...read more.

3. Reserve Army to capture Bapaume 4. Reserve Army to move north and capture Gommecourt. In theory these plans should have worked, however the German observer balloons saw all the preparations. German observers could see the new roads being built and the railway line being placed. Also Germans noticed that the British guns were appointed into the air, which meant that they were ready to fire. So the Germans built bombproof shelters. On 24th June 1916 at 07.00 hours the preliminary artillery bombardment of the German trenches began. Over 17,000,000 shells were fired on the 16-mile front over 8 days. However 30% of the shells fired were defective and many fell short of their targets, but the one's that did work could be heard on the south coast of England. When ever the shells stopped firing 60,000 men stepped out of the trenches and into no-mans-land. At 07.15 the mines buried under the German positions were exploded. ...read more.

Winston Churchill wrote that "In personal the operation has been disastrous." An official historian Mr C W Bean wrote "It was murder, with men wasted because of the incompetence, callowness and personal vanity of those in high authority" and historian John Keegan said Haig " thought more of his own position than preserving the live of soldiers." In my opinion I believe that the battle of the Somme was a slaughter as the preparations were not well concealed. The plans did not have a back up in case the attack failed which it did. The troops were not prepared and didn't think that there still could be some Germans alive in their trenches. The high command also naively believed that the Germans were all dead and whenever reports came back to command telling them of the disastrous attack and when new order were sent back by the time they reached the front line the soldier were died or the report would never make it to the front line. So in my opinion the battle of the Somme was a complete slaughter of British soldiers ...read more.