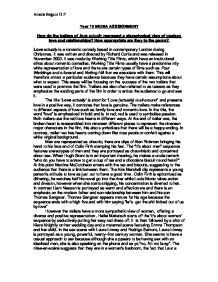 How do the trailers of love actually represent a stereotypical view of modern love and relationships? How appropriate are they to the genre?

Year 10 MEDIA ASSSIGNMENT How do the trailers of love actually represent a stereotypical view of modern love and relationships? How appropriate are they to the genre? Love actually is a romantic comedy based in contemporary London during Christmas. It was written and directed by Richard Curtis and was released in November 2003. It was made by Working Title Films, which have an institutional ethos about romantic comedies. Working Title Films usually have a predominantly white representation of love and there are certain types of films such as Four Weddings and a funeral and Notting Hill that we associate with them. This will therefore attract a particular audience because they have certain assumptions about what to expect. This essay will be focusing on the success of the two trailers that were used to promote the film. Trailers are also often referred to as teasers as they emphasize the exciting parts of the film in order to entice the audience to go and see it. The title 'Love actually' is short for 'Love (actually) is all around' and presents love in a positive way, it connotes that love is genuine. ...read more.

Heike Makatsch starts off the 'it's about women' sequence by seductively putting her sexy red dress off. It is then followed by a shot of Kiera Knightly on her wedding day and a maternal scene featuring Emma Thompson and her child. In the sex scene with Laura Linney and Rodrigo Santoro, Laura Linney is portrayed as a young, powerful, twenty-first century woman. She seems to have a casual approach to sex because although she appears to be having sex with an idealised man, she is also speaking on the phone and says "no, I'm not busy". The mise-en-sc�ne suggests that they are in a woman's bedroom, the fact that Laura Linney is on top and that she is wearing clothes while Santoro appears to be naked illustrates to the audience that she is the dominant person. Love actually has a quintessential English cast and some of the actors bring with them their own personal stereotypes. Hugh Grant, for example is always type cast as a diffident, awkward Englishman. Kris Marshall however is only recognised in the UK as Nick in My Family where he plays the same gullible, foolish and naive character. ...read more.

In trailer one, the leitmotif along with the song 'All You Need Is Love,' helps to convey the message that "love is all you need." In contrast trailer two does not use 'All You Need Is Love' but uses 'Turn Me On' to create a sensual atmosphere and to coincide with the sexual nature of the clips featured. However both trailers use 'This will be ever lasting love' to change the tempo. I preferred trailer one because I thought it was less reliant on the actors to help sell the film and more so on the storylines. Trailer one also contained a lot more humour in comparison to trailer two which focused more on scenes that were sexually suggestive. Furthermore, I liked the fact that trailer one opened with Hugh Grant and Colin Firth welcoming the audience because it made me feel that they were personally addressing me. I believe that both trailers were successful at reaching their target audience because trailer one had more obvious jokes and emphasized the comedy aspect of Love actually which would appeal to the younger viewers. In contrast trailer two featured more sexual scenes and used the names of actors to entice and attract the older viewers. Amena Begum 11:7 ...read more.