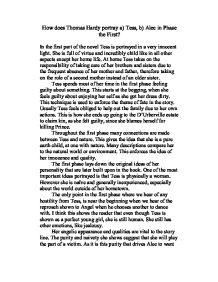 How does Thomas Hardy portray a) Tess, b) Alec in Phase the First?

How does Thomas Hardy portray a) Tess, b) Alec in Phase the First? In the first part of the novel Tess is portrayed in a very innocent light. She is full of virtue and incredibly child like in all other aspects except her home life. At home Tess takes on the responsibility of taking care of her brothers and sisters due to the frequent absence of her mother and father, therefore taking on the role of a second mother instead of an older sister. Tess spends most of her time in the first phase feeling guilty about something. This starts at the begging, when she feels guilty about enjoying her self as she got her dress dirty. This technique is used to enforce the theme of fate in the story. ...read more.

The only point in the first phase where we hear of any hostility from Tess, is near the beginning when we hear of the reproach shown to Angel when he chooses another to dance with. I think this shows the reader that even though Tess is shown as a perfect young girl, she is still human. She still has other emotions, like jealousy. Her angelic appearance and qualities are vital to the story line. The purity and naivety she shows suggest that she will play the part of a victim. As it is this purity that drives Alec to want to want her so much. Therefore her individual character traits lead to her own downfall. Alexsander D'Urberville immediately is established as the complete opposite of Tess. ...read more.

The omen or fate theme is also connected to the name of the places where Alec lives. Such as Alec's home, 'The Slopes'. At some points in the first phase, Alec is portrayed in a more positive light, in a more heroic way. He rescues Tess when she is arguing with another girl. However this heroic act is then turned sour as we see that his purpose is not so genuine. He attempts to maintain an innocent fa�ade to try and trick Tess into thinking his intentions are good. Most of the time he has a light hearted demeanour and is playful with Tess, but never seems to be able to restrain himself. Alec's devilish qualities make him the exact opposite of the angelic Tess and only make you feel more sympathy for her as from the beginning, the odds seem to be stacked against her. ...read more.