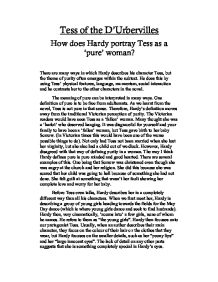 How does Hardy portray Tess as a pure woman?

Tess of the D'Urbervilles How does Hardy portray Tess as a 'pure' woman? There are many ways in which Hardy describes his character Tess, but the theme of purity often emerges within the subtext. He does this by using Tess' physical features, language, mannerism, social interaction and he contrasts her to the other characters in the novel. The meaning of pure can be interpreted in many ways. One definition of pure is to be free from adulterants. As we learnt from the novel, Tess is not pure in that sense. Therefore, Hardy's definition moves away from the traditional Victorian perception of purity. The Victorian readers would have seen Tess as a 'fallen' woman. Many thought she was a 'harlot' who deserved hanging. It was disgraceful for yourself and your family to have been a 'fallen' woman, but Tess gave birth to her baby Sorrow. (In Victorian times this would have been one of the worse possible things to do). Not only had Tess not been married when she lost her virginity, but she also had a child out of wedlock. However, Hardy disagreed with that way of defining purity in a woman. ...read more.

Tess didn't want to claim 'kin' from the D'Urbervilles. However, Prince was one of her family's most prized possessions and without him, they couldn't travel as far as they used to, which jeopardises their livelihood. Tess goes in the end for her family. Tess very rarely puts herself first or even does things to please her. Her selfishness is another way in which Hardy presents her as pure. In phase the second, after she leaves Alec with his unborn child, Tess meets a strange man with a tin pot full of red paint. His 'job' was to spread the word of God by painting on gates, walls and sides of buildings. His scene is very important because it shows how much Tess' religion is against her and the people who follow it. When the man paints the words 'THY, DAMNATION, SLUMBERETH, NOT' Tess asks, "Do you believe what you paint?" to which he replies "Believe that tex? Do I believe in my own existence?" This shows the strength Tess had through the next few months of her life as we read later on. ...read more.

Angel's past is much worse than Tess' because he had control of everything. Tess was raped/seduced by an older man. While Tess forgives him, Angel does not forgive Tess. Hardy makes this even worse by adding details such as 'Clare preformed the irrelevant act of stirring the fire'. This has several connotations to the devil and hell. Even at Tess' weakest moments we still feel sympathy for her and see her as an innocent, pure woman. Hardy often uses short sentences with Tess. This means that she does not take over the conversation and stands back. This shows her as helpless, making us sympathise for her even more. When she murders Alec, she does it because her limits had been pushed by everything Alec has done. He raped her, got her pregnant, he had manipulated her into becoming his mistress and persuaded her into thinking that Angel was never coming back. After she had sent Angel away telling him 'it is too late', she returns upstairs, and finally starts shouting at Alec. We only hear parts of the argument because we are briefly put into the eyes of the housekeeper of 'The Herons, Mrs Brooks, who is eaves dropping on them through the keyhole. Tess herself refers to herself as 'a caged bird'. Jenny Billing ...read more.