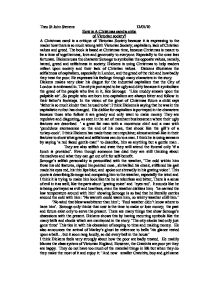 How is A Christmas Carol a critique of Victorian Society?

Theo St John Stevens 12/01/10 How is A Christmas carol a critic of Victorian society? A Christmas carol is a critique of Victorian Society because it is expressing to the reader how there is so much wrong with Victorian Society; capitalism, lack of Christian values and greed. The book is based at Christmas time, because Christmas is meant to be a time of togetherness, love and generosity to everyone. Especially to the ones less fortunate. Dickens uses the character Scrooge to symbolise the opposite values, namely, hatred, greed and selfishness in society. Dickens is using Christmas to help readers reflect upon society and their lack of Christian values. Dickens illustrates the selfishness of capitalism, especially in London, and the greed of the rich and how badly they treat the poor. He expresses his feelings through many characters in the story. Dickens makes very clear his disgust for the industrial capitalism that the City of London is embraced in. The city is portrayed to be ugly and dirty because it symbolises the greed of the people who live in it, like Scrooge: 'Like muddy smears upon the palpable air'. ...read more.

It sounds like he is being portrayed as evil and heartless, even the weather dislikes him; 'he carried the low temperature around with him' showing Scrooge is so bad that he literally carries around the cold with him: 'No warmth could warm him, no wintry weather chill him.' 'No wind that blew was bitterer than him'; 'Foul weather didn't know where to have him'. Scrooge only thinks that now is the time to make or lose money; the past and future exist only to serve the present. There are many things that show Scrooge's obsessions with the present. Dickens shows this by having recurring symbols like the many bells and clocks which are mentioned in the story. 'The city clocks had only just gone three' This ties in with his obsession of keeping to time and making money. He also announces the arrival of Marley's ghost be reference to bells 'his glance rested upon a bell... but it soon rang loudly, so did every bell in the house' I think Dickens feels very strongly about how the poor are badly treated. ...read more.

So it is showing the lack of togetherness that Christians are meant to have at Christmas. To conclude the main issue I think Dickens criticises in his society is their obsession with money, their greed and irresponsibility as citizens. But the main idea is that money is just a material matter and when you die you will lose it and will not be able to take it with you. Dickens in writing this novella, is warning people that if they don't change they will all suffer for their selfishness. The last ghost is warning what Victorian society can potentially develop into if they don't change. It shows how badly it can go wrong and how people can easily have the wrong motives in life. I think that his main message is that you should live a happy and kind life not just at Christmas and be with your family and give to your family and be generally a kind person. A Christmas carol is a critique of Victorian society because it evaluates how things can go wrong because of capitalism and money at the expense of Christian moral values. Dickens shows that society should work towards trying to be like the Cratchits regardless of class. ...read more.