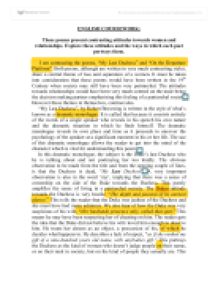 I am contrasting the poems, &quot;My Last Duchess&quot; and &quot;On the Departure Platform&quot;. Both poems, although are written in very much contrasting styles, share a central theme of loss and separation of a women

ENGLISH COURSEWORK: These poems present contrasting attitudes towards women and relationships. Explore these attitudes and the ways in which each poet portrays them. I am contrasting the poems, "My Last Duchess" and "On the Departure Platform". Both poems, although are written in very much contrasting styles, share a central theme of loss and separation of a women. It must be taken into consideration that these poems would have been written in the 19th Century when society may still have been very patriarchal. The attitudes towards relationships would have been very much centred on the male being the decision making partner emphasising this feeling of a patriarchal society. However these themes in themselves, contrast also. "My Last Duchess", by Robert Browning is written in the style of what's known as a dramatic monologue. It is called that because it consists entirely of the words of a single speaker who reveals in his speech his own nature and the dramatic situation in which he finds himself. The dramatic monologue reveals its own place and time as it proceeds to uncover the psychology of the speaker at a significant moment in his or her life. The use of this dramatic monologue allows the reader to get into the mind of the character which is vital for understanding this poem. ...read more.

This shows his lack of love for women and respect for the opposite sex, portraying a poor attitude. However one could argue that the Duke does have a really strong love for his wife. His choice of getting his wife painted by Fra Pandolf (a renaissance artist) must be considered a signal that he found his wife beautiful and must have loved her deep. His decision to keep the painting hung up in his place of residence is an indication that he is not ashamed of her and what she did, showing he does not detest her, although she wounded him deeply. Perhaps, killing her was a bit too extreme but I believe the Duke's belief was that his wife was either his, or no-ones which is quite harsh but is a true reflection on the society in which the poem is set. Thomas Hardy's poem "On the Departure Platform" is a poem of separation and loss of a loved one. Unlike in "My Last Duchess", this poem deals with this theme in a more contrasting way. The narrator may well be the poet himself looking at the departure of the lady in white, white being used to indicate her purity, "wee white spot", "soft white array". ...read more.

It is also possible to heighten the emotion of the poem adding effect. To sum up, I believe that both of the narrators in both poems have very contrasting attitudes towards women and relationships. The Duke in "My Last Duchess" is possessed. He is jealous. His wife, the Duchess is seeing other men out of friendship. She let's painters such as Fra Pandolf paint beautiful paintings of her, yet the Duke is not satisfied and arranges for her killing. I don't think that the Duke is mad, but I believe it is more of what possesses his mind and his heart. He has this burning love for this woman but does not understand why the love is not returned. However the lover in "On the Departure Platform" shows a great deal of emotion. His woman has left him and left him empty handed and heart broken. In reality, this familiarises itself with the Duke as both men face rejection from their loved ones, however the way in which the chose to deal with this rejection couldn't be more different. One kills his wife and the other allows his lover to go. This point emphasises the contrasting attitudes toward women and relationships of the characters. ...read more.

This essay shows a knowledge of both texts and an engagement with poetry techniques. The writer should learn to embed quotes more effectively and address the question with more focus throughout the essay. ***