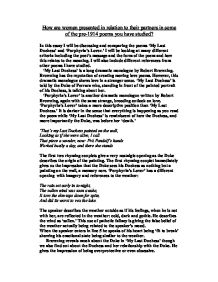 In this essay I will be discussing and comparing the poems 'My Last Duchess' and 'Porphyria's Lover.' I will be looking at many different criteria including the poet's message

How are women presented in relation to their partners in some of the pre-1914 poems you have studied? In this essay I will be discussing and comparing the poems 'My Last Duchess' and 'Porphyria's Lover.' I will be looking at many different criteria including the poet's message and the form of the poem and how this relates to the meaning. I will also include different references from other poems I have studied. 'My Last Duchess' is a long dramatic monologue by Robert Browning. Browning has the reputation of creating moving love poems. However, this dramatic monologue shows love in a stranger sense. 'My Last Duchess' is told by the Duke of Ferrara who, standing in front of the painted portrait of his Duchess, is talking about her. 'Porphyria's Lover' is another dramatic monologue written by Robert Browning, again with the same strange, brooding outlook on love. 'Porphyria's Lover' takes a more descriptive position than 'My Last Duchess.' It is darker in the sense that everything is happening as you read the poem while 'My Last Duchess' is reminiscent of how the Duchess, and more importantly the Duke, was before her 'death.' 'That's my Last Duchess painted on the wall, Looking as if she were alive, I call That piece a wonder, now: Fr( Pandolf's hands Worked busily a day, and there she stands The first two rhyming couplets give a very nostalgic opening as the Duke describes the origin of the painting. The first rhyming couplet immediately gives us the impression that the Duke sees his Duchess as nothing but a painting on the wall, a memory now. 'Porphyria's Lover' has a different opening with imagery and references to the weather: The rain set early in to-night, The sullen wind was soon awake, It tore the elm-tops down for spite, And did its worst to vex the lake. ...read more.

In 'My Last Duchess' the Duke reveals himself as being a proud man, which actually hurts his situation in the end: -E'en then would be some stooping; and I choose Never to stoop.Oh sir, she smiled, no doubt, Whene'er I passed her; but who passed without Much the same smile? He speaks about 'stooping' as if he is 'lowering' himself to her level. This immediately gives the idea that he is on some higher plain than she. His arrogance also leads the situation to worsen, as he says he chooses never to stoop. He also talks about his interactions with her: when she smiles at him when he passes her, he feels that the smile she gives him is suppose to be a sacred thing only special to him. However, everyone receives that smile when they pass her. This again reveals his obsessive tendencies, to be anxious over-analysing every detail. One main comparison between both Browning's poems is the subject of love. The Duke hardly ever talks about passion, love or compliments toward the Duchess, while Porphyria's lover talks a lot about his passion for her, and his everlasting love. This is the main thing that the Duke misses in his monologue. As he speaks to the messenger, the reader begins to realise that there is no real love between the Duke and his Duchess. We also see, as the monologue continues, that there is a lack of communication between the Duchess and Duke the only time he speaks of his interactions with her is the section about the 'smile.' The marriage was probably built on arrangement, and apart from his thoughts on jealousy and owning her as if she was an object, he has no real feelings toward her. ...read more.

The speaker in this poem never actually confronts his 'first love' he admires her from a distance, like the Duke. The Duke obsesses over the Duchess but never interacts with her. Women were seen definitely as objects, who needed to worship their partners as servants. In the case of 'Porphyria's Lover,' women are also seen to be heaven sent, and in a way are to be worshipped as well. 'My Last Duchess' reveals women to also be forward, and friendly with everyone, no matter how their partner might feel about it. They are perceived as having many flaws, which is always regarded by the speaker (man) as a negative thing, they should instead be perfect. Robert Browning's poems involving love and women take many different outlooks depending on the subject matter. Both the poems considered are dramatic monologues as the speakers reveal themselves as the poem goes on. 'First Love' by John Clare takes a different viewpoint, where love is less dangerous and woman's face 'blooms like a sweet flower.' This poem is more descriptive and overindulgent in love. The pace is fast and the rhyme pattern very even, making it a very simple poem. The kind of love described in it is more of a na�ve infatuation rather than a unhealthy obsession. 'A Woman to her Lover' by Christina Walsh definitely takes a different outlook as it is from the point of view of a woman. It actually addresses many of the points found in pre-1900 poems involving women. And basically refuses them as being valid points for love. It is women's rebellion against the typical views of their partners. In general, pre-1900 poems, took a very 'man's world' outlook, seeing men as the dominating sex and women as their unequal partners. ?? ?? ?? ?? ...read more.