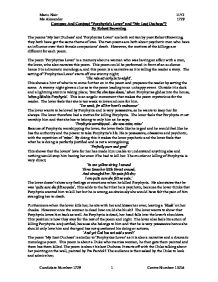 Compare And Contrast "Porphyria's Lover" and "My Last Duchess"? By Robert Browning The poems 'My last Duchess' and 'Porphyrias Lover' are both written by poet Robert Browning, they both have got the same theme of love. The two poems are both about psychotic men who have an influence over their female companions' death. However, the motives of the killings are different for each poem. The poem 'Porphyrias Lover' is a memory about a woman who was having an affair with a man, the lover, who also narrates this poem. This poem could be performed in front of an audience hence it is a dramatic monologue, and this poem is a narrative as it is telling the reader a story. The setting of 'Prophyrias Lover' starts off one stormy night; 'The rain set early in to-night'. This shows a hint of what is to come further on in the poem and prepares the reader by setting the scene. A stormy night gives a clue as to the poem leading to an unhappy event. Outside it is dark and a lightning storm is taking place; 'tore the elm-tops down,' when Porphyrias glides into the house, 'when glided in Porphyria'. This is an angelic movement that makes the poem mysterious for the reader. ...read more.

Not any women but women they know i.e. their lovers. However, both the poems are different due to the fact that the murderers had different motives that resulted in the deaths of the two women. The lover murdered Porphyria because he wanted her to himself and for her to only love him. The Duke gets his Duchess killed because he is jealous that she treats all men the same and wants to punish her; 'This grew; I gave commands; Then all smiles stopped together.' However, the Duke gets all his wives murdered, so there is a possibility that he is delusional and psychotic. This may prove that he was making up everything about his wife treating all men the same, because he could have just wanted a simple reason to kill her. The lover is also psychotic because he believes that by killing his love Porphyria, she will only love him and be with him; 'Porphyria worshipped me...And strangled her.' Both the male characters from both poems are psychotic, because of them the women die. However, the way that the women are killed and the reason they are killed are different. 'Porphyrias Lover' and 'My Last Duchess' are also very ironic. In the poem 'Porphyrias Lover', the lover kills Porphyria, yet still he has love for her; 'And strangled her...And I, its love, am gained instead!' ...read more.

And example of this is where he is Neptune and he is controlling his wives, the seahorses. By contrast, the articulate lover uses figurative language. The dramatic monologue used by the Duke has enjambment, establishing that he is inarticulate. Although, every two lines in his dramatic monologue rhymes, suggesting that he is quite articulate. 'Porphyria's Lover' and 'My Last Duchess' are both similar because they are dramatic monologues and are narrative poems, which have been written to be heard. Also, both of narrators of the poems lack emotions and feelings when their loved ones die. Furthermore, both poems create visual imagery to help convey the meanings. However, 'Porphyria's Lover' uses figurative language to create imagery while 'My Last Duchess' uses symbols to create imagery. Robert Browning's poems, 'Porphyria's Lover' and 'My Last Duchess', are both similar yet different in their own ways that have been established in this essay. The story, structure, use of language and the characters all compare and contrast. Both poems show different points of view. In 'Porphyrias Lover' it is of a man and a woman committing adultery. Also the poem 'My Last Duchess' is of a man whose wife is committing adultery. Both poems show different emotions and feelings towards their loved ones and also the different ways different people convey them. Manu Nair 11Y2 Ms Alexander 1729 Candidate Number: 1729 1 Centre Number: 13216 ...read more.