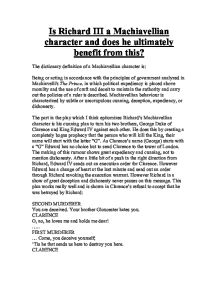 Is Richard III a Machiavellian character and does he ultimately benefit from this?

Is Richard III a Machiavellian character and does he ultimately benefit from this? The dictionary definition of a Machiavellian character is: Being or acting in accordance with the principles of government analyzed in Machiavelli's The Prince, in which political expediency is placed above morality and the use of craft and deceit to maintain the authority and carry out the policies of a ruler is described. Machiavellian behaviour is characterized by subtle or unscrupulous cunning, deception, expediency, or dishonesty. The part in the play which I think epitomizes Richard's Machiavellian character is his cunning plan to turn his two brothers, George Duke of Clarence and King Edward IV against each other. ...read more.

Your brother Gloucester hates you. CLARENCE O, no, he loves me and holds me dear! ..... FIRST MURDERER ... Come, you deceive yourself; 'Tis he that sends us here to destroy you here. CLARENCE It cannot be, for he bewept my fortune, And hugged me in his arms, and swore with sobs That he would labour my delivery. One Moment in the play where Richard shows much cunning and deceitfulness is in Act One where Richard is seducing Lady Anne the widow of the Prince of Lancaster. Richard says that he has never cried, not even at his father's funeral but says that Anne's refusal to marry him makes him cry. ...read more.

After the beheading of Hastings, Richard had to persuade the Mayor of London that Hastings killing was justified. So Richard and Richmond dressed in rusty armour (Stage direction says; Enter Richard, Duke of Gloucester, and Buckingham, in rotten armour, marvellous ill-favoured). This cunning move makes him appear weak just like when he was seducing Anne where in actual fact it is Richard who holds all the cards. So therefore, in my interpretation of a Machiavellian character, Richard is a Machiavellian. Does he benefit from it? I think that he does. Richard, a deformed man, can never exist in a peaceful world but on a battlefield is equal to any man. To gain this war Richard used Machiavellian "techniques/tactics" so that he could live. Without his Machiavellian side Richard probably would have stayed under his brother's shadows, shunned by his mother. ...read more.