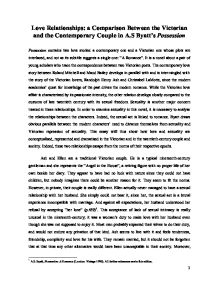 Love Relationships: a Comparison Between the Victorian and the Contemporary Couple in A.S Byatt's Possession

Love Relationships: a Comparison Between the Victorian and the Contemporary Couple in A.S Byatt's Possession Possession contains two love stories: a contemporary one and a Victorian one whose plots are interlaced, and not as its subtitle suggests a single one: "A Romance". It is a novel about a pair of young scholars who trace the correspondence between two Victorian poets. The contemporary love story between Roland Mitchell and Maud Bailey develops in parallel with and is intermingled with the story of the Victorian lovers, Randolph Henry Ash and Christabel LaMotte, since the modern academics' quest for knowledge of the past drives the modern romance. While the Victorian love affair is characterized by its passionate intensity, the other relation develops slowly compared to the customs of late twentieth century with its sexual freedom. Sexuality is another major concern treated in these relationships. In order to examine sexuality in this novel, it is necessary to analyse the relationships between the characters. Indeed, the sexual act is linked to romance. Byatt draws obvious parallels between the modern characters' need to distance themselves from sexuality and Victorian repression of sexuality. This essay will thus show how love and sexuality are conceptualised, represented and dramatised in the Victorian and in the twentieth-century couple and society. Indeed, these two relationships escape from the norms of their respective epochs. Ash and Ellen are a traditional Victorian couple. He is a typical nineteenth-century gentleman and she represents the "Angel in the House", a retiring figure with no proper life of her own beside her diary. They appear to have had no luck with nature since they could not have children, but nobody imagines there could be another reason for it. They seem to fit the norms. However, in private, their couple is really different. Ellen actually never managed to have a sexual relationship with her husband. She simply could not bear it, since her, the sexual act is a brutal experience incompatible with marriage. ...read more.

As far as Roland is concerned, this relation with Maud will also transform him. At the beginning, he has little self-confidence. He thinks of himself as an "application form, for a job, a degree, a life" (p.10) and "as a failure" (p.11). He has done what was expected of him and appears to have no personal desires and aims. This lack of self-confidence is increased by his physical appearance that underlines the anti-heroic image of him: "He was a small man, with very soft, startling black hair and regular features. Val called him a Mole, which he disliked. He had never told her so" (p.11). However, even if Roland seems to be paralysed in his personal choice of living, he is developing throughout the work or the cooperation with Maud. He progresses in emotional and professional respects. He finds a woman with whom he can live a deep and satisfying relation, much more than that between him and Val. At the end, he gets a better job and in this way he leaves his limitations and this new profession gives him and Maud the possibility to have a relation without overwhelming the other. To sum up, the progression of Maud and Roland's affair is slower than the one between Ash and LaMotte, but they still manage to reach a kind of happiness at the end of the novel. The arrangement that Roland suggests is for him to take a job out of the country and leave Maud, at least part of the time, a solution to their common need for both independence and love. Nevertheless, this arrangement is not so easy to find and Roland and Maud will have to face various problems before. Throughout the novel, the reader might think on various occasions that Maud and Roland will succumb to their desire for each other but each time, they retire. This abstinence is due to many different reasons. ...read more.

Actually, Ash had a marriage full of love with Ellen but deprived of sexuality. Conversely, Roland was sexually satisfied with Val but love was lacking in their couple. By beginning a new affair, both Ash and Roland will fulfil their respective lack finding a harmonious relationship with love and sexuality next to LaMotte and Maud. Other similarities between these two couples can be distinguished throughout the novel. Firstly, at the beginning both women are reticent to get involved in an emotional affair but little by little, they let themselves be seduced. Secondly, so as to make this coldness disappear, the lovers need to escape from their society. In fact, Ash and LaMotte travel to Yorkshire where their love can exist and the contemporary couple will do the same trip. Finally, these two relationships are not only balanced because of their harmony between sex and love, but also because man and woman share the same passion: Ash and LaMotte are fervent Victorian poets and Roland and Maud are passionate critics. In conclusion, Byatt really turns all the expectations up side down. With Ash and Christabel, she criticizes the conventions that being so strict and counter-nature destroyed people's life. These rules force society into hypocrisy because people then behave "normally" in public, but exteriorize themselves, their true nature and pulsions in private, hiding for fear of the condemnation they would suffer. With Roland and Maud, she also condemns the ideas of her own society about sexuality. She draws, thus, a comparison of the two epochs, analyzing both the problem of the nineteenth century and of the twentieth century. She also demonstrates how in all times women have fought against the rules of society. In the nineteenth century the lack of women's freedom was a true difficulty for man-woman relationships. In the twentieth century, the extreme freedom in sexuality, the need for women to equal men is a new trouble for relationships. Thus, Byatt really proposes a serious analysis observing that there are problems in all societies and denouncing them. ...read more.