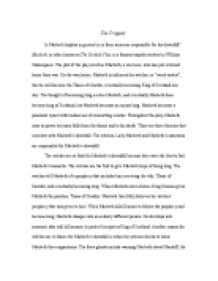 Macbeth: Theories on who is to blame for Macbeth's downfall

﻿The Tragedy Is Macbeth hapless in general or is there someone responsible for his downfall? Macbeth, or other known as The Scottish Play, is a famous tragedy written by William Shakespeare. The plot of the play involves Macbeth, a war hero, who has just returned home from war. On the way home, Macbeth is informed by witches, or ?weird sisters?, that he will become the Thane of Cawdor, eventually becoming King of Scotland one day. The thought of becoming king excites Macbeth, and eventually Macbeth does become king of Scotland, but Macbeth becomes an unjust king. Macbeth becomes a paranoid, tyrant with tendencies of committing murder. Throughout the play, Macbeth rises to power but soon falls from the throne and to his death. There are three theories that correlate with Macbeth?s downfall. The witches, Lady Macbeth and Macbeth?s ambitions are responsible for Macbeth?s downfall. ...read more.

Another reason why Macbeth?s ambitions are at fault is that after Lady Macbeth tries to stop Macbeth from killing once, Macbeth never confides in her again throughout the play. Macbeth knows that what he is doing is unjust and avoids telling Lady Macbeth, so he will not back out of his decisions. Macbeth?s own ambitions is what fatefully ends his life because Macbeth couldn?t control his dark side. Although the witches and Lady Macbeth are important contenders in Macbeth?s downfall, Macbeth?s ambition is what caused this tragedy. Even though Macbeth is manipulated by his wife and the witches, Macbeth is the one in control of his actions. ?I am in blood/Stepp'd in so far that, should I wade no more,/Returning were as tedious as go o'er (iii.iv.135-137)?. The protagonist demolishes his option of going backwards when he kills Duncan, only fueling his ambitions even more even though he knows what he is doing is erroneous. All in all, Macbeth?s hamartia in this tragedy, is the reason Macbeth fell from power and to his death. ...read more.