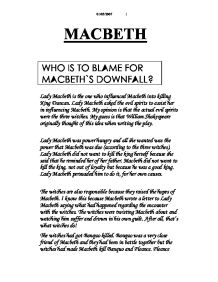 Who is to blame for Macbeth's downfall?

MACBETH WHO IS TO BLAME FOR MACBETH`S DOWNFALL? Lady Macbeth is the one who influenced Macbeth into killing King Duncan. Lady Macbeth asked the evil spirits to assist her in influencing Macbeth. My opinion is that the actual evil spirits were the three witches. My guess is that William Shakespeare originally thought of this idea when writing the play. Lady Macbeth was power hungry and all she wanted was the power that Macbeth was due (according to the three witches). Lady Macbeth did not want to kill the king herself because she said that he reminded her of her father. Macbeth did not want to kill the king, not out of loyalty but because he was a good king. Lady Macbeth persuaded him to do it, for her own causes. The witches are also responsible because they raised the hopes of Macbeth. I know this because Macbeth wrote a letter to Lady Macbeth saying what had happened regarding the encounter with the witches. The witches were twisting Macbeth about and watching him suffer and drown in his own guilt. After all, that's what witches do! ...read more.

Macbeth is also very superstitious (most people were at that time) and this is shown when he believes the prophecy the witches told him that Banquo`s offspring would become kings. Towards the end of the play when Lady Macbeth dies and the battle is drawing closer, Macbeth shows some of his good qualities. He wishes for a normal life for which he would have lived to an honourable age but he recognises that he has denied himself of this. Even when Macbeth hears that the prophecy has become true of Birnam wood coming to Dunsinane, he rejects this idea and fights on until he realises that Macduff wasn`t in a natural birth but instead was 'Untimely ripped' from his mother's womb. When Macbeth realises what he has done and how he has been tricked by the witches, he realises that it is useless and so he fights on, only to be slain. Macbeth can be summarised into a character although strong physically, he is very weak mentally and it is the weakness which causes the downfall and the change of Macbeth. Other factors are also involved such as his wife whose ambition is very strong at first and is much stronger mentally than Macbeth but it is also Macbeth's ambition and his trust in the witches which ultimately change him. ...read more.

As Macbeth progresses with his evil acts, however, Lady Macbeth starts to go mad which is almost like what her prophecy mentioned. She also hallucinates like her husband but this time about trying to cleanse her hands of the blood will not wash off. Even though she may be a strong character, greatly supporting her husband, she is reduced and battered by the deeds and her conscience which she is able to rid from Macbeth, eventually drives her insane. She the kills herself, unable to remove the 'damned spot'. At his wife's suicide, Macbeth has already thrown away his conscience, so much so, that Macbeth commits even more evil acts afterwards without even admitting to his conscience. Over the course of the play, Macbeth and Lady Macbeth greatly change with respect to their characters, but mainly Macbeth. Although Macbeth was weak at first, it was the strong Lady Macbeth who helped him through the first murder but in sacrifice to controlling Macbeth and his conscience, she lost control of hers and in consequence, turned insane and killed herself. Thus in end it was worth to call Macbeth a 'Dead butcher' but it must not be forgotten that at the beginning of the play, Macbeth and his wife were ordinary nobles at the time. 01/05/2007 1 ...read more.