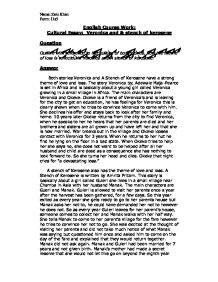 Outline with reference to the culture of both stories, how the theme of loss is reflected in Veronica and A stench of kerosene.

English Course Work: Cultural Essay: Veronica and & stench of kerosene Question Outline with reference to the culture of both stories, how the theme of loss is reflected in Veronica and A stench of kerosene. Answer Both stories Veronica and A Stench of Kerosene have a strong theme of love and loss. The story Veronica by, Adewale Maja-Pearce is set in Africa and is basically about a young girl called Veronica growing in a small village in Africa. The main characters are Veronica and Okeke. Okeke is a friend of Veronica's and is leaving for the city to get an education, he has feelings for Veronica this is clearly shown when he tries to convince Veronica to come with him. She declines his offer and stays back to look after her family and home. 10 years later Okeke returns from the city to find Veronica, when he speaks to her he hears that her parents are died and her brothers and sisters are all grown up and have left her and that she is now married. ...read more.

When Guleri heard this she soaked her cloths in kerosene and burnt herself Manak was devastated about this. The mother was happy and joyous about the new baby boy and dressed him in the finest clothes. She put the baby in the arms of Manak. He shouted out hysterically "get him away from me he stinks of kerosene." Both stories have a few similarities. Both stories are set in poor, small villages and have two similar main characters. Veronica and Manak are similar characters because through out both stories these characters feel the most loss. Veronica and Guleri have something in common they both die at the end of the two stories. Manak and Okeke both have to deal with the death of someone they love in the two stories. The story Veronica has the theme of love and loss present. There are a couple types of love in the story Veronica. Two types of love are Veronica's love for here family and her home this is shown when Okeke offers Veronica the chance to go with to the city but she stands up to explain "I have to go and cook, my father will be home soon". ...read more.

Manak's character also expresses love. The love and respect for his mother is clearly shown when Manak wanted to retort against his mother when she was telling him what to do, but he did not. Manaks love for his wife Guleri is shown when she is leaving for her parents house he could have demanded Guleri to stay but he did not because he loves her. The theme continues with all the loss. Firstly at the start of the story Manak feels loss when Guleri leaves for her parent's house. I can tell this form the way he tries to convince her not to go to her parent's house. Guleri feels loss when she hears of Manaks second marriage and she cannot bear this thought because she loves him so much as a result she commits suicide. Manak feels loss when he hears of the news that Guleri is dead, I know this because it says, "he could only stare and feel his own life burning out". That is how both stories A Stench of Kerosene and Veronica both reflect the theme of love and loss. Name: Zain Khan Form: 11s5 ...read more.