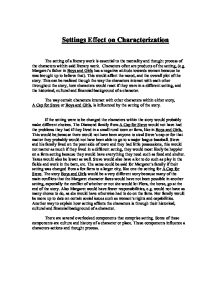 Settings Effect on Characterization The setting of a literary work is essential to the mentality and thought process of the characters within said literary work. Characters often are products of the setting, (e.g. Margaret's father in Boys and Girls has a negative attitude towards women because he was brought up to believe that). This would affect the mood, and the overall plot of the story. This can be realized though the way the characters interact with each other throughout the story, how characters would react if they were in a different setting, and the historical, cultural and financial background of a character. ...read more.

This would be because there would not have been anyone to steal Steve's cap or for that matter they probably would not have been able to go to a major league baseball. Steve and his family lived on the poor side of town and they had little possessions, this would not matter as much if they lived in a different setting, they would most likely be happier on a farm setting because they would have everything they need such as food and shelter. Taxes would also be lower as well. ...read more.

Also Margaret would have fewer responsibilities, e.g. would not have as many chores to do, as she would have otherwise had to do on the farm. Her family would be more up to date on certain social issues such as women's rights and capabilities. Another way to explain how setting affects the characters is through their historical, cultural and financial background of a character. There are several overlooked components that comprise setting. Some of these components are culture and history of a character or place. These components influence a characters actions and thought process. ...read more.