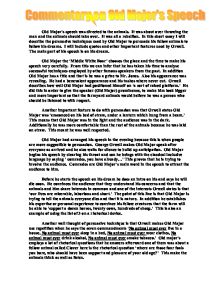 Old Major's speech was directed to the animals. It was about over throwing the man and the animals should take over. It was all a rebellion. In this short essay I will describe the persuasive techniques used by Old Major to persuade his fellow animals to follow his dreams. I will include quotes and other important features used by Orwell. The main part of his speech is on his dream. Old Major the 'Middle White Boar' chooses the place and the time to make his speech very carefully. From this we can infer that he has taken his time to analyse successful techniques employed by other famous speakers from the past. In addition Old Major has a title and that is he was a prize to Mr. Jones. Also his appearance was revealing. He had a benevolent appearance and his tushes where never cut. Orwell describes how well Old Major had positioned himself on 'a sort of raised platform.' He did this in order to give the speaker (Old Major) prominence, to make him look bigger and more important so that the farmyard animals would believe he was a person who should be listened to with respect. ...read more.

Another well thought of persuasive technique is that Orwell makes Old Major use repetition when he says the seven commandments 'No animal must ever live in a house, No animal must ever sleep in a bed, No animal must ever wear clothes, No animal must ever drink alcohol, No animal must ever smoke tobacco.' Old major's employs a lot of rhetorical questions that he answers afterward one of them was about a fellow animal called Clover here is the rhetorical question 'where are those four foals you bore, who should have been support and pleasure of your old age?' This make the animals think as well as listen. Old Major has another persuasive technique and that is to use statistics to support his argument. One of his statistics is when he states the farm only 'support a dozen horses, twenty cows, hundreds of sheep.' He also makes sure his statements are short, clear, direct and punchy to the point. To my assumption he uses about eight words in his sentence to point the audience in the right direction. ...read more.

Old Major had a slogan, which every animal followed and that was 'two legs bad, four legs good' and 'all animals are equal.' Additionally Old Major concocts a music that is catchy to the animals and it was called 'Beasts of England.' The animals sang this. The middle white boar didn't evolve any great names of history or god, but only stated that his mother helped his in his life. So this is saying his mother is an important idol. To wrap up his persuasive speech Old Major set a goal for the animals and that was to start the 'Rebellion' and I believe this also could be used as a personal address to his comrades. The speech finishes when the animals sing the song 'Beasts of England.' And with the racket Mr Jones shoots his gun into the and with the panic all the animals go to sleep. After a few months Old Major dies. Old Major had employed about 25 points on the art of persuasion in public speaking and he also put a point across. So now you see how people and Old Major use such clever techniques to persuade the audience to follow. Lastly Orwell made Old Major have analytical powers and influential abilities. ...read more.