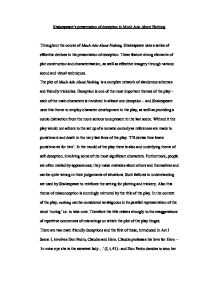 Shakespeare's presentation of deception in Much Ado About Nothing.

Shakespeare's presentation of deception in Much Ado About Nothing Throughout the course of Much Ado About Nothing Shakespeare uses a series of effective devices in his presentation of deception. These feature strong elements of plot construction and characterization, as well as effective imagery through various sound and visual techniques. The plot of Much Ado About Nothing is a complex network of slanderous schemes and friendly trickeries. Deception is one of the most important themes of the play - each of the main characters is involved in atleast one deception - and Shakespeare uses this theme to employ character development in the play, as well as providing a comic distraction from the more serious tone present in the last scene. Without it the play would not adhere to the set up of a romatic comedy as references are made to punishment and death in the very last lines of the play. 'I'll devise thee brave punishments for him'. In the mould of the play there is also and underlying theme of self-deception, involving some of the most significant characters. Furthermore, people are often misled by appearences; they make mistakes about others and themselves and can be quite wrong in their judgements of situations. Such failures in understanding are used by Shakespeare to reinforce the setting for plotting and trickery. Also this theme of misconception is cunningly mirrored by the title of the play. ...read more.

Beatrice's deception and transformation is presented in the next scene and follows a similar course of events, emphasizing a symmetry and similarity between both characters. After being deceived by Hero and Ursula, Beatrice's speech shows similarity to Benedick's when she cites the necessity to return his love as a reason to 'tame [her] wild heart to [his] loving hand.'(III,i,107) However there are several differences evident in the comparison of both speeches, especially in the contrasting use of tone and language. While Benedick's speech is in prose and has a tone of informality ['Love me? Why it must be requited'](II,iii,97), Beatrice's is in formal, rhyming verse, spoken in a more passionate tone ['If thou dost love, my kindness shall incite thee...'](III,i,107); such subtle differences in characterisation is evidence for the use of deception as a means for character development. The benevolent deceptions of don pedro make way for the contrasting malevolent deceptions of his 'bastard brother' don john. This plot concerns the claudio-hero relationship, stressing his strong malevolent intent and passionate hatred of claudio as it follows his previous deception of tricking claudio into believieving that don pedro himself was 'enamoured on Hero'(II,i,67). In this second deception don johns motives are made clear in act II scen ii as being 'to misuse the price, to vex claudio, to undo Hero and kill Leonato.' Claudio is easily decieved and his vulnerability and impressionability is evident in an instant.This deception is a larger version of Don Johns previous plot and is the most significant carried out in the play. ...read more.

Shakespeare uses this self-deception to lighten the tone of the play, even throughout the grave atmosphere created as a consequence of Don John's successful deception. Dogberry also draws vanity from his knowledge of legal procedures and, for example, in the trial of Borachio by the Sexton, he attempts to play the part of a knowledgeable judge, but ends up making a mockery of the process of law by assuming guilt before examining the accused - 'Masters, it is proved already that you are little better than false knaves...' Consequently, Dogberry becomes a means of obstruction to the discovery of truth, promoting wider deception, therefore, through his own self-deception. In actual fact the only character who strikes us as being altogether free of self-deception is the evil Don John, who is a master in the art of deceiving others, in his own right. Shakespeare uses his consistently constructive presentation of deception not just for character and plot development, but also to enlighten his audience towards other more subtle themes in the play. There is a sense of balance in the development of the various deception ploys, especially between Benedick and Beatrice, and also in the presentation of schemes of various motivations. In addition, the words of Balthasar's song in Act II Scene iii are echoed through the course of the play through the male organisation of all the deception plots, and reflects the patriarchal setting of the play. ...read more.