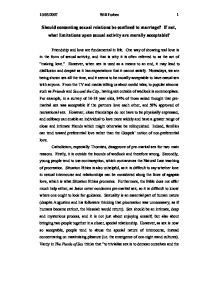 Should consenting sexual relations be confined to marriage? If not, what limitations upon sexual activity are morally acceptable? Friendship and love are fundamental in life

Should consenting sexual relations be confined to marriage? If not, what limitations upon sexual activity are morally acceptable? Friendship and love are fundamental in life. One way of showing real love is in the form of sexual activity, and that is why it is often referred to as the act of "making love." However, when sex is used as a means to an end, it may lead to disillusion and despair as it has expectations that it cannot satisfy. Nowadays, we are being shown sex all the time, and it seems to be morally acceptable to have casual sex with anyone. From the TV and media telling us about sordid tales, to popular sitcoms such as Friends and Sex and the City, having sex outside of wedlock is commonplace. For example, in a survey of 16-18 year olds, 84% of those asked thought that pre-marital sex was acceptable if the partners love each other, and 58% approved of recreational sex. However, close friendships do not have to be physically expressed, and celibacy can enable an individual to love more widely and have a greater range of close and intimate friends which might otherwise be relinquished. Indeed, families can tend toward preferential love rather than the Gospels' notion of non-preferential love. ...read more.

However, there was a prohibition of bestiality, homosexuality and nakedness. Therefore, if we do accept that sexual relations do not have to be confined, then how far can we allow extra-marital behaviour? Homosexuality contravenes Natural Law. However, it is natural as many people are homosexuals (4% of males, i.e. about 120 million people in the world), rarely choosing to be so, it just happens that some people are attracted to the same sex. Therefore, we can hardly condemn if it so many males in the world are gay. I think that whilst it may not be as natural as heterosexuality, it cannot be dismissed on unnatural grounds, as even some animals are gay. If one is concerned with loving and intimate relationships, then homosexuality offers this to people who are attracted to the same sex, as there is a distinct difference between close friendships and close friendships where there is attraction involved. Just because people cannot understand how others can be attracted to the same sex, does not mean that it is wrong. I therefore think that whilst it may seem alien, it should be accepted, as due to either nature or nurture, some people are that way inclined. Likewise, if we look at pre-marital sex, then what age should be a minimum? ...read more.

Therefore, in conclusion, I think that consenting sexual relationships can extend beyond marriage, but one has to be careful of the circumstances. Homosexuality is permissible (although an extreme infringement of Natural Law), but close incest, paedophilia and bestiality are fundamentally wrong and should therefore not be practised. One could take a utilitarian standpoint, but although these actions may be fine with the two consenting parties who will be happy, society as a whole is likely to be appalled and therefore the greatest happiness for the greatest number is not achieved. One may say that what is done in private is fine, as society does not know about it, but that is a poor justification for succumbing to temptation. Merely because one thinks about something, does not justify the action. If someone thinks about having sex with a young girl, that is up to them. It could be attributed to natural human curiosity. However, to go one-step further and act on these thoughts is one-step too far. It may confirm to people that this is what they want, and therefore they are more likely to act in this way again, exploiting children. It is therefore easier to say that as a benchmark, sex is acceptable if both parties actually feel real intangible love for each other. This not only maintains sex as special and mysterious, but also permits homosexuality. ?? ?? ?? ?? 10/05/2007 Will Forbes 1 ...read more.