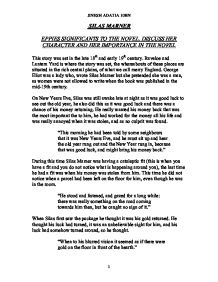 Silas Marner - Eppies significants to the novel. Discuss her character and her importance in the novel.

SILAS MARNER EPPIES SIGNIFICANTS TO THE NOVEL. DISCUSS HER CHARACTER AND HER IMPORTANCE IN THE NOVEL This story was set in the late 18th and early 19th century. Raveloe and Lantern Yard is where the story was set, the whereabouts of these places are situated in the rich central plains, of what we call merry England. George Eliot was a lady who, wrote Silas Marner but she pretended she was a man, as women were not allowed to write when the book was published in the mid-19th century. On New Years Eve, Silas was still awake late at night as it was good luck to see out the old year, he also did this as it was good luck and there was a chance of his money returning. He really wanted his money back that was the most important the to him, he had worked for the money all his life and was really annoyed when it was stolen, and as no culprit was found. "This morning he had been told by some neighbours that it was New Years Eve, and he must sit up and hear the old year rung out and the New Year rung in, because that was good luck, and might bring his money back." ...read more.

"A blonde dimpled girl of eighteen, who has vainly tried to chastise her curly auburn hair," He also knew the child had come to him, so he was not going to give it to anyone else. Even when he came to the Red House on the night he found the baby and someone tried to examine the child, Silas abruptly said he couldn't part with it. "No, no; I can't part with it, I can't let it go," said Silas abruptly. "It's come to me- I've a right to keep it." You could tell Silas was more content with Eppie than with the money. As he did not really spare a thought to the money after he found his new gold, Eppie. He probably completely forgot about it some days, but that would have been unlikely to see before he found Eppie. "Sixteen years after Silas Marner had found his new treasures on the heart." The baby was Godfrey's and the first time he saw the child properly. He was regretful as he had left his wife and child, in such a terrible states a couple of years back. But he was joyful as he has another chance to see his beautiful daughter. "The wide-open blue eyes looked up at Godfrey's without any uneasiness or sign of recognition: the child could make no visible audible claim on its father; and the father felt a strange mixture of feelings - a conflict and regret of joy." ...read more.

She needed somebody to look after her in her younger years; this was taken care of by Silas, someone to love her so much, Silas also did this. So she could not accept the offer of Godfrey and Nancy Cass because she loved Silas too much. She did not care if he was poor she still stuck by Silas like Silas stuck by her. "I'll cleave to him as long as he lives." The significance of this story is that Silas Marner finds there is more to life than working all day counting his money. His contentment is established when an admirable diminutive girl is found lying in his house. This girl Eppie finds good in her father Silas Marner. Behind every dark cloud there is a silver lining, which is Eppie to Silas, Silas is the dark cloud and Eppie is the silver lining. Eppie concludes the book by saying her and Silas are the happiest people in the world. I think she is right in that sense because they are two very simple people who have started to live life to the max and excel themselves, Silas did this when he first found Eppie and Eppie did this at an older age to help, her weak father through his older years. "O father," said Eppie, "what a pretty home ours is! I think nobody could be happier than we are." JINESH ADATIA 10BN 1 ...read more.