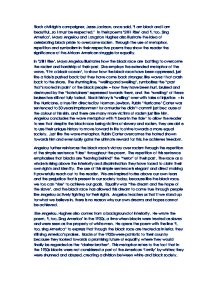 Still I Rise vs I Too Sing America

Black civil rights campaigner, Jesse Jackson, once said, "I am black and I am beautiful...so I must be respected." In their poems 'Still I Rise' and 'I, too, Sing America', Maya Angelou and Langston Hughes also illustrate the idea of celebrating black pride to overcome racism. Through the use of metaphor, repetition and symbolism in their respective poems they show the reader the significance of the African American struggle for equality. In 'Still I Rise', Maya Angelou illustrates how the black race are battling to overcome the racism and hardship of their past. She employs the extended metaphor of the wave, "I'm a black ocean", to show how the black race have been oppressed, just like a tide is pushed back; but they have come back stronger, like waves that crash back to the shore. The rhyming line, "welling and swelling", symbolises the "past that's rooted in pain" of the black people - how they have been hurt, bruised and destroyed by the "hatefulness" expressed towards them, and the "swelling" of these bruises has still not fully faded. ...read more.

Like Angelou, Hughes also comes from a background of inferiority. He wrote the poem, 'I, too, Sing America' in the 1930s, a time when blacks were treated as slaves and were seen as the property of white men. He opens the poem with the line "I, too, sing America" to express that though the black race are treated as inferior, they still sing America's praises. Blacks of the 1930s were patriotic to their country because they looked towards a promising future of equality, where they would finally be regarded as the "darker brother". This metaphor refers to the fact that in the 1930s blacks were not considered a part of the American 'family' by whites; they were shunned and abused, creating a division between white and black society. The imbalance between the races is highlighted by Hughes' use of personal pronouns. He says, "They send me to eat in the kitchen" to show how "they", being the whites, have control over him (the persona of the poem). ...read more.

America, being a symbol of freedom, dreams for the future and most of all, equality. Both Hughes and Angelou urge the reader to look past the facade of skin colour and embrace our "black brother". We live in a multi-cultural nation so it is essential that we learn to accept the differences in others and recognise that each race is unique, but that uniqueness is what makes us special. They criticise those who cannot overcome prejudices, saying they will be "ashamed when they finally see how beautiful I am". They show the reader that we need to overcome our prejudices and look for the good in people because when we finally see it, we will be ashamed that we didn't see it earlier. In 'Still I Rise' and 'I, too, Sing America' Hughes and Angelou allow us to learn from their unique black history, and how the black race were able to triumph over injustice in society in order to gain freedom and equality. Through the effective use of language techniques they inspire the reader to be victorious over our own personal struggles, and also to rise above the prejudice in society to see the good in everybody. ...read more.

An essay that shows a very strong understanding of the social and historical contexts that impacted both pieces of writing. A title with a specific reference to context would have been a good focus for this essay.
In terms of analysis there needs to be more on structure and form and the consideration of these ideas alongside the contextual issues that are being explored.