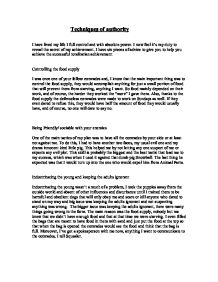 Techniques of authority I have lived my life I full control and with absolute power. I now feel it's my duty to reveal the secret of my achievement. I have six pieces of advice to give you to help you achieve the successful totalitarian achievement Controlling the food supply I was once one of your fellow comrades and, I know that the main important thing was to control the food supply, they would accomplish anything for just a small portion of food that will prevent them from starving, anything I want. So food mainly depended on their work, and of course, the harder they worked the "more" I gave them. ...read more.

I started declaring that he was friends with Jones and that he was on Jones' side and other evil things that could make everyone hate Snowball and be happy that I'm the one in charge instead. Creating a leader myth and personality cult. Make sure you don't talk to any other comrades or anything below your class. Have a spokesperson. for example, I had Squealer, anything I wanted to communicate to the brainless comrades. I started staying more inside and not going out as much as I used to, there was nothing to do, I had my dogs in charge of the outside world and I didn't want to waste my valuable time looking at some disgusting animals working. Although in the meantime, I did check on them, but of course never went out without any protection. ...read more.