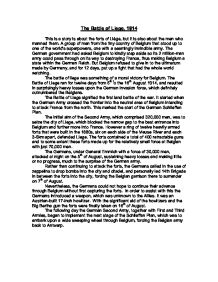 The Battle of Liege, 1914 This is a story is about the forts of Li�ge, but it is also about the men who manned them. A group of men from the tiny country of Belgium that stood up to one of the world's superpowers, one with a seemingly invincible army. The German government had asked Belgium to kindly step aside so its 2 million-man army could pass through on its way to destroying France, thus making Belgium a state within the German Reich. But Belgium refused to give in to the ultimatum made by Germany, and for 12 days, put up a fight that had the whole world watching. ...read more.

It started when the German Army crossed the frontier into the neutral area of Belgium intending to attack France from the north. This marked the start of the German Schlieffen Plan. The initial aim of the Second Army, which comprised 320,000 men, was to seize the city of Liege, which blocked the narrow gap to the best entrance into Belgium and further more into France. However a ring of twelve heavily armed forts that were built in the 1880s, six on each side of the Meuse River and each 3-5km apart, defended Liege. ...read more.

Nevertheless, the Germans could not hope to continue their advance through Belgium without first capturing the forts. In order to assist with this the Germans introduced a weapon, which was unknown to the Allies. It was an Austrian-built 17-inch howitzer. With the significant aid of the howitzers and the Big Bertha gun the forts were finally taken on 16th of August. The following day the German Second Army, together with First and Third Armies, began to implement the next stage of the Schlieffen Plan, which was to embark upon a wide sweeping wheel through Belgium, forcing the Belgian army back to Antwerp. ...read more.