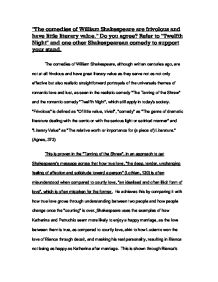 &quot;The comedies of William Shakespeare are frivolous and have little literary value&quot; Do you agree? Refer to &quot;Twelfth Night&quot; and one other Shakespearean comedy to support your stand.

"The comedies of William Shakespeare are frivolous and have little literary value." Do you agree? Refer to "Twelfth Night" and one other Shakespearean comedy to support your stand. The comedies of William Shakespeare, although written centuries ago, are not at all frivolous and have great literary value as they serve not as not only effective but also realistic straightforward portrayals of the universals themes of romantic love and lust, as seen in the realistic comedy "The Taming of the Shrew" and the romantic comedy "Twelfth Night", which still apply in today's society. "Frivolous" is defined as "Of little value, trivial", "comedy" as "The genre of dramatic literature dealing with the comic or with the serious light or satirical manner" and "Literary Value" as "The relative worth or importance for (a piece of) Literature." (Agnes, 373) This is proven in the "Taming of the Shrew", in an approach to get Shakespeare's message across that how true love, "the deep, tender, unchanging feeling of affection and solicitude toward a person" (Lothian, 130) ...read more.

Also, Shakespeare portrays physical appearance and first impressions as important in contributing to both romantic and true love, then, a trait that is true even to date, hence proving his comedies to be not at all frivolous and of great literary value. In "Twelfth Night", Shakespeare portrays two types of love between lovers, romantic, the "imaginary but impractical love" (Coleman, 19) and true love. In both portrayals of love, the "love at first sight" symptom is a typical condition, by which all the lovers are stricken. For example, when Orsino first saw Olivia, he thought she "purged the air of pestilence". Also, Viola is deeply in love with Orsino even before three days have passed. When Olivia complains that "even so quickly may one catch the plague", Sebastian instantly falls in love with Olivia. (Nelson-Cave, 154-155). Also, "Twelfth Night" is a comedy that is of great literary value as it gets Shakespeare's messages of love across effectively and easily as he creates a light-hearted scenerio in which everything is to the extreme and perfect. ...read more.

It is not fair to say that Shakespeare's comedies are frivolous and of little literary value, like some critiques, which mentioned that Shakespeare demeans women through his portrayal of love, with the mindset that a wife is not supposed to answer her husband's insolence with insolence and threat with threats, and has to bide by her husband's wants and needs if she wants true happiness. This in itself does not mean that Shakespeare's plays are of little literary value, as it merely shows the way of thinking back then. His plays are still of literary value as he delivers his messages on love realistically, and it is through a straightforward approach that we can compare with the present that even society had changed, true love will always remain the same. Hence I conclude that the comedies of William Shakespeare, although written centuries ago, are not at all frivolous and have great literary value as it serves as not only an effective, but also realistic and straightforward portrayal of the universal themes of romantic love and lust as seen in the realistic comedy "The Taming of the Shrew" and the romantic comedy "Twelfth Night", which still apply in today's society. 2 ...read more.