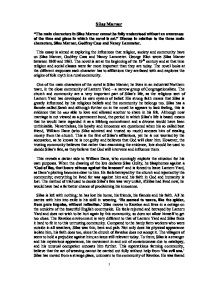 Silas Marner "The main characters in Silas Marner cannot be fully understood without an awareness of the time and place in which the novel is set." Discuss in relation to the three main characters, Silas Marner, Godfrey Cass and Nancy Lammeter. This essay is aimed at exploring the influences that religion, society and community have on Silas Marner, Godfrey Cass and Nancy Lammeter. George Eliot wrote Silas Marner between 1860 and 1861. The novel is set at the beginning of the 19th century and at that time religion and social classes were far more important than they are today. The novel looks at the different responses each character has to afflictions they are faced with and explores the origins of folk myth in a rural community. One of the main characters of the novel is Silas Marner; he lives in an industrial Northern town, in the close community of Lantern Yard - a narrow group of Congregationalists. The church and community are a very important part of Silas's life, as the religious sect of Lantern Yard has developed its own system of belief. His strong faith means that Silas is greatly influenced by his religious beliefs and the community he belongs too. Silas has a fianc�e called Sarah and although further on in the novel he appears to lack feeling, this is evidence that he was able to love and allowed another to share in his life. Although now marriage is not viewed as a permanent bond, the period in which Silas's life is based means that he would have regarded it as a lifelong commitment and a divorce would have been unthinkable. ...read more.

This child changes his life, as Silas believes it is sent from above. Eppie has restored his faith in God and humanity. 'Thought and feeling were so confused within him, that if he had tried to give them utterance, he could only have said that the child was come instead of the gold - that the gold had turned into the child.' Eppie revealed the forgotten, loving nature of Silas. She provides links between Silas and the people of Raveloe, allowing Silas to become an insider. With the help of Eppie, Silas is able to overcome his catalepsy, as she brings him more happiness and joy than he had ever received from the gold. He is also able to unite his old faith with his new one and raise Eppie without means of punishment; an unusual method of nurture for the time in which he lived. "Eppie was a creature of endless claims and ever growing desires, seeking and loving sunshine, and living sounds" Unlike the gold which required nothing, Eppie wanted new experiences and Silas's instinctive kindness towards her enriches his life, unlike the life of Godfrey which is empty and without meaning. In contrast to the life of Silas, the rural landowner's lifestyle appears aimless, indulgent and boring. Lady Cass had died many years previously leaving an all male family. Godfrey Cass the Squire's eldest son is a feeble, spineless man. He married Molly, a drug addict who is below his class and at that time the situation was unacceptable. Godfrey grew tired of Molly and is left to cope with the consequences, as the miserable and vengeful Molly is determined to reveal herself to the Squire. ...read more.

This worries Silas as he is scared that Eppie will disappear like the gold, as mysterious as before, leaving him with nothing. Silas rebukes Godfrey for not claiming her sixteen years ago, but all Godfrey has in return is his argument of blood; he shows no love or companionship towards her. Silas believes he has a right to keep her, "when a man turns a blessing from his door, it falls on them as take it in." Eppie loves Silas, the only family she has ever known, and refuses to leave him stating that 'nobody shall ever come between us.' This makes Godfrey angry, but he soon realizes that her refusal to be with him is his punishment for not taking her in as his daughter years before. Godfrey and Nancy accept Eppie's decision, and through this rejection, Godfrey is forced, in turn, to move on. Neither Godfrey nor Silas can go back into the past, fore even Lantern Yard has disappeared, when Silas returns there at the end of the novel. As Eppie and Aaron get married Silas uses the wedding ring he had removed from Molly and gives it to Eppie. This is a clear reference to the sentiment and love that now fills his heart. The characters, Silas Marner, Godfrey Cass and Nancy Lammeter cannot be fully understood without an awareness of the time and place in which the novel is set because many of their responses to difficult situations were based on their upbringing and religious beliefs. The three main characters represent the different layers of the community and social classes. This novel is about human companionship, and proves that human love, especially the love of a child, is worth far more than gold. ?? ?? ?? ?? 1 ...read more.