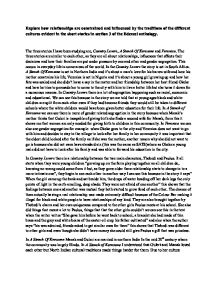 The three stories I have been studying

Explore how relationships are constrained and influenced by the traditions of the different cultures evident in the short stories in section 3 of the Edexcel anthology. The three stories I have been studying are, Country Lovers, A Stench Of Kerosene and Veronica. The three stories are similar to each other, as they are all about relationships, influences that effects their decisions and how their families are put under pressure by one and other and gender segregation. This occurs in everyday life in some areas of the world. In the Country Lovers the story is set in South Africa. A Stench Of Kerosene is set in Northern India and it's about a man's love for his barren wife and how his mother constrains his life, Veronica is set in Nigeria and it's about a young girl growing up and how her fate was sealed and she didn't have a say in the matter and her friendship between her best friend Okeke and how he tries to persuade her to come to the city with him to live a better life but she turns it down for a numerous reasons. In Country Lovers there is a lot of segregation happening such as racial, economic and educational. We can see this because in the story we are told that at young ages black and white children are split from each other even if they had become friends they would still be taken to different schools where the white children would have been given better education for their life. In A Stench of Kerosene we can see there is more of gender related segregation in the story because when Manak's mother thinks that Guleri is incapable of giving birth she finds a second wife for Manak, from this it shows me that women are only needed for giving birth to children in this community. In Veronica we can also see gender segregation for example when Okeke goes to the city and Veronica does not want to go ...read more.

The innocence in two, young children became tainted as they became young adults. "The young man Njabulo asked her father for her" demonstrates how traditional Thebedi's family is, so it would be a shock if they find what she's been doing. Her culture holds her back from what she wants to do or say. It also demonstrates that black people of South Africa during the apartheid were more traditional then the white people. I believe this is because the white people ruled at the time so the black people were left never to develop their ideas on tradition. They couldn't change their culture just like the UK has since the early nineteen hundreds where women were seen as to clean the house and look after children where as in now women have the same rights as men. "She was calm; she said she had not see what the white man had did in the house" demonstrates her giving up knowing that the white man will always win. The South African apartheid has taught her that black people are unimportant in the eyes of white people. Also, she refers to Paulus as "the white man" and not her sweet heart any more. This demonstrates how she realized Paulus was just another white mane and to him she was just a black woman. It was as simple as that. I think that Njabulo played a huge role in Country Lovers because he supported Thebedi and he didn't care whether the baby was his or not. He just wanted to be there for her. In the story Country Lovers the rules of apartheid pull Thebedi and Paulus apart we can see this when the author (Nadine Gordimer) tells us that "they were not afraid of one another" this tells us lots it's a way of saying that they kept their relationship secret because they were afraid of the rest of society, what would happen to them, their families and the rest of their lives. ...read more.

A Stench Of Kerosene it dealt with the problems in a part of the world about arranged marriages but it went in to detail about it and how many of the family in northern India were a matriarch one and how even if a man has his own opinion his mother would change it if she didn't like it, and how if your not the person who you love you don't have anything to live for. A Stench of Kerosene Manak didn't like the idea of marrying again but maybe as he grows he might decide to change his mind on arranged marriages. There is a huge difference between English culture and the cultures in the three short stories. We do not have the right to judge other people on their cultural beliefs as they could do the same to us. We all have different cultures and when we have adjusted ourselves to them we get used to them and keep them. In these three short stories it is clear that culture plays the biggest role and is put before love. Veronica tells the story of domestic violence and how it is for a woman in the country and the city. When she was younger she didn't have it great she was beaten at home by her father but still loved him she does everything she can for her family but they don't care about her they only care for themselves and veronica accepts this as fate and lives with it she know her only role in life is to cook and clean nothing else. From reading studying these three short stories I have realized that where I come from my culture and community is a more of an open for me, there are a lot opportunities for me even at a young age that for some won't even come in a lifetime. By Piers Johnson10SG ...read more.