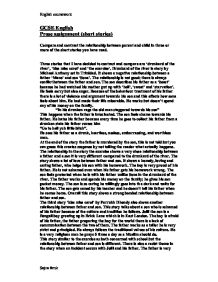 Compare and contrast the relationship between parent and child in three or more of the short stories you have read.

GCSE English Prose assignment (short stories) Compare and contrast the relationship between parent and child in three or more of the short stories you have read. Three stories that I have decided to contrast and compare are 'drunkard of the river', 'kiss miss carol' and 'the exercise'. Drunkard of the river is story by Michael Anthony set in Trinidad. It shows a negative relationship between a father 'Mano' and son 'Sona'. The relationship is not good; there is always conflict between the father and son. The son describes his father as a 'beast' because he had watched his mother put up with 'hell', 'sweat' and 'starvation'. He feels sorry but also anger. Because of the behaviour treatment of his father there is a lot of violence and argument towards his son and this effects how sona feels about him. ...read more.

The story shows a lot of love between father and son. It shows a homely, loving and caring father, who helps his son with his homework. The boy is very proud of his father. He is not ashamed even when his father gets his homework wrong. The son feels protected when he is with his father unlike Sona in the drunkard of the river. The father works and spends his money on the family; he gives his son pocket money. The son is so caring he willingly goes into the dark and waits for his father. The son gets caned by his teacher and he doesn't tell his father when he comes home. Overall this story shows a strong bonded relationship between father and son. ...read more.

There is also a racist theme in the story when an incident occurs with Jolil and his father. The father is very organised and hardworking. Overall this story shows a positive bond between the father and the son. The ending of each story reinforces the relationship between father and son. These stories both show the negative and positive sides of a relationship. To sum it all up all I have to say is that all stories have one thing in common and that is called respect! There is no respect in drunkard of the river. I personally enjoyed and understood all the stories however, my favourite one was kiss miss carol because I could relate to it in my own ways because I also have my rules that I obey and traditional values that I have to follow. ?? ?? ?? ?? English coursework Sajna faruk ...read more.