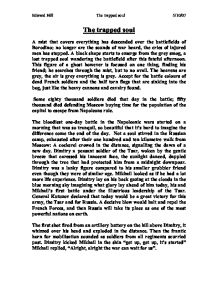 The trapped soul A mist that covers everything has descended over the battlefields of Borodino; no longer are the sounds of war heard, the cries of injured men has stopped. A black shape starts to emerge from the grey smog, a lost trapped soul wandering the battlefield after this fateful afternoon. This figure of a ghost however is focused on one thing, finding his friend; he searches through the mist, but to no avail. The heavens are grey, the air is grey everything is grey. Accept for the battle colours of dead French soldiers and the half torn flags that are sinking into the bog, just like the heavy cannons and cavalry found. Some eighty thousand soldiers died that day in the battle; fifty thousand died defending Moscow buying time for the population of the capital to escape from Napoleons rule. The bloodiest one-day battle in the Napoleonic wars started on a morning that was so tranquil, so beautiful that it's hard to imagine the difference come the end of the day. ...read more.

By now there are numerous casualties on both sides as each side swaps shells. But the Russians seem to be taking the heavier bombardment from artillery. The generals ensue this as a stalemate they need to bide more time; more and more fresh troops are thrown at the grinders of the French guns. "You two, I should have you shot for deserting, but I need men, follow me and that's an order" shouted a passing captain. They both decided they had more chance of living on the battlefield than holding the captain to his word. Dimitry, Mikhail and ten others ran through the billowing grey, red smoke that had incarcerated the whole battle. To Dimitry it seemed as if they were fighting in the fiery inferno of Hell itself. He was running past humans, were they friend or foe? They scrambled into a large shell hole in a wooded area. As the battle reaches the afternoon, more and more men lay dead, scattered on the fields churned up by the movement of heavy artillery and constant, chivalrous glorious cavalry charges. ...read more.

Mikhail then scavenges a nearby French uniform and run's into the clearing to make sure the deed is done. Mikhail stands in front of his friend struggling to make a choice, he has come to love this friend as a brother, which makes his decision even harder. Standing in front of this friend on the floor deciding whether to let Dimitry live and escape to tell the generals to evacuate the base or whether to kill Dimitry and have the chance to capture the Russian generals. He follows orders and does his duty. Dimitry is no more. Yet Mikhail did not weep and did not cry he was in a state of shock. Mikhail later died leading a bayonet charge on the base camp of the Russian generals. Here he lies forever more holding the tricoleur. There two men lie, first they seem allies, then just friends and now it seems they cannot make amends for the deed which one man has done and the need for forgiveness, which he needs. A black shape starts to emerge from the grey smog, a lost trapped soul wandering the battlefield after this fateful afternoon. Edward Hill The trapped soul 5/10/07 ...read more.