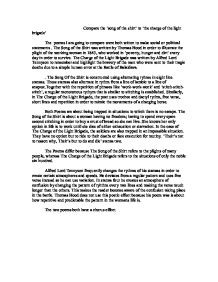 Compare the 'song of the shirt' to 'the charge of the light brigade' The poems I am going to compare were both witten to make social or political statements . The Song of the Shirt was written by Thomas Hood in order to illustrate the plight of the working woman in 1843, who worked in 'poverty, hunger and dirt' every day in order to survive. The Charge of the Light Brigade was written by Alfred Lord Tennyson to remember and highlight the bravery of the men who were sent to their tragic deaths due to a simple human error at the Battle of Balaklava. ...read more.

Similarly, in The Charge of the Light Brigade, the poet uses trochee and dactyl rythm, free verse, short lines and repetition in order to mimic the movements of a charging horse. Both Poems are about being trapped in situations to which there is no escape. The Song of the Shirt is about a woman having no freedom; having to spend every spare second stitching in order to buy a crust of bread so she can live. She knows her only option in life is to work until she dies of either exhaustion or starvation. ...read more.

Alfred Lord Tennyson frequently changes the rythms of his stanzas in order to create certain atmospheres and speeds. He deviates from a regular pattern and uses free verse instead so he can use variation. In stanza four he creates an atmosphere of confusion by changing the pattern of ryhthm every two lines and making the verse much longer than the others. This makes the reader become aware of the confusion taking place in the battle. Thomas Hood does not use this poetic effect because his poem was is about how repetitive and predictable the pattern in the womans life is. The two poems both have a chorus effect. Times New Roman Century Schoolbook Microsoft Works MSWorksWPDoc CompObj CompObj ...read more.