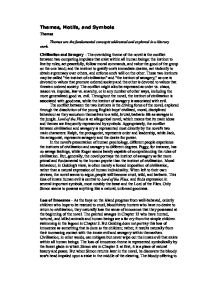 Themes, Motifs, and Symbols - Themes are the fundamental concepts addressed and explored in a literary work - Civilization and Savagery

Themes, Motifs, and Symbols Themes Themes are the fundamental concepts addressed and explored in a literary work. Civilization and Savagery - The overriding theme of the novel is the conflict between two competing impulses that exist within all human beings: the instinct to live by rules, act peacefully, follow moral commands, and value the good of the group on the one hand; and the instinct to gratify one's immediate desires, act violently to obtain supremacy over others, and enforce one's will on the other. These two instincts may be called "the instinct of civilization" and "the instinct of savagery," as one is devoted to values that promote ordered society and the other is devoted to values that threaten ordered society. The conflict might also be expressed as order vs. chaos, reason vs. impulse, law vs. anarchy, or in any number of other ways, including the more generalized good vs. evil. Throughout the novel, the instinct of civilization is associated with goodness, while the instinct of savagery is associated with evil. The conflict between the two instincts is the driving force of the novel, explored through the dissolution of the young English boys' civilized, moral, disciplined behaviour as they accustom themselves to a wild, brutal, barbaric life as savages in the jungle. Lord of the Flies is an allegorical novel, which means that its main ideas and themes are frequently represented by symbols. Appropriately, the conflict between civilization and savagery is represented most directly by the novel's two main characters: Ralph, the protagonist, represents order and leadership, while Jack, the antagonist, represents savagery and the desire for power. In the novel's presentation of human psychology, different people experience the instincts of civilization and savagery to different degrees. Piggy, for instance, has no savage feelings, while Roger seems barely capable of comprehending the rules of civilization. But, generally, the novel portrays the instinct of savagery as far more primal and fundamental to the human psyche than the instinct of civilization. ...read more.

Indeed, Golding intends for it to symbolize one, with the faceless and frightened littluns serving as surrogates for the masses of common people and the various older boys filling positions of power and importance with regard to these underlings. Some of the older boys, such as Ralph and especially Simon, are kind to the littluns; others, such as Roger and Jack, are cruel to them. In this way, two basic conceptions of power slowly emerge on the island, each corresponding to one of the novel's philosophical poles-civilization and savagery. Simon, Ralph, and Piggy represent the idea that power should be used for the good of the group and the protection of the littluns; this notion is associated with the instinct toward civilization, order, and morality. Roger and Jack represent the idea that power should enable those who hold it to gratify their own desires and act on their impulses, treating the littluns as servants or objects for their own amusement; this notion is associated with the savagery and amorality that they constantly exhibit. When Jack's irresponsibility leads to the failure of the signal fire, an important symbol of the boys' connection to civilization, and thwarts the boys' first chance at being rescued, Ralph flies into a rage, indicating that he is still governed by order, morality, and a desire to achieve the good of the whole group. But Jack has killed a pig, and he is too excited and gratified by his accomplishment to care very much about the missed chance to escape the island; his bloodlust and thirst for power have overwhelmed his interest in civilization. Whereas he previously justified his commitment to hunting by claiming that it was for the good of the group, now he no longer feels the need to justify his behavior at all. Instead, he indicates his new orientation toward savagery by painting his face like a barbarian; leading wild, eerie chants among the hunters; and apologizing for his failure to maintain the signal fire only when Ralph seems ready to fight him over it. ...read more.

Now, when all he can do is struggle to stay alive as long as possible, the deus ex machina (an improbable or unexpected device or character introduced to resolve a situation) of the naval officer appears at the last possible moment to bring the boys back to the world of law, order, and society. Golding's use of irony in the novel's last chapter complicates the boundaries between civilization and savagery, implying that the two are more closely connected than the story has illustrated. After all, the boys' appalling savagery brings about the rescue that their most coordinated and purposive efforts were unable to achieve. Still, many readers of Lord of the Flies have criticized its ending, feeling that Ralph's death would have provided a more appropriate conclusion to this dark novel. It is certainly true that the biting irony permeating Golding's characterization of the naval officer-who is unable to understand how upstanding British lads could have acted with such poor form-is tonally inconsistent with the dramatic register of the rest of the book. In other words, his appearance is somewhat anti-climactic. But it is important to recognize that the novel's ending is not particularly happy, and that the moment in which the officer encounters the boys is not one of pure, untainted joy. The "civilized" officer adds further irony to the scene, as he is part of an adult world in which violence and war coexist with civilization and social order. He reacts to the savage children with disgust, yet this disgust is tinged with hypocrisy. Similarly, the children are so shocked by the officer's presence, and are now psychologically so far removed from his world, that they do not instantly celebrate his arrival. Rather, they stand there baffled and bewildered. Even Ralph, whose life has literally been saved by the presence of the ship, weeps tears of grief rather than joy. For Ralph, as for the other boys, nothing can ever be as it was before coming to the island of the Lord of the Flies. Bottom of Form Bottom of Form Bottom of Form ...read more.