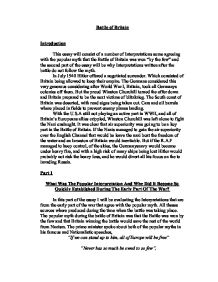 This essay will consist of a number of Interpretations some agreeing with the popular myth that the Battle of Britain was won &quot;by the few&quot; and the second part of the essay will be why Interpretations written after the battle do not follow the myth.

Battle of Britain Introduction This essay will consist of a number of Interpretations some agreeing with the popular myth that the Battle of Britain was won "by the few" and the second part of the essay will be why Interpretations written after the battle do not follow the myth. In July 1940 Hitler offered a negotiated surrender. Which consisted of Britain being allowed to keep their empire. The Germans considered this very generous considering after World War I, Britain, took all Germanys colonies off them. But the proud Winston Churchill turned the offer down and Britain prepared to be the next victims of blitzkrieg. The South coast of Britain was deserted, with road signs being taken out. Cars and oil barrels where placed in fields to prevent enemy planes landing. With the U.S.A still not playing an active part in WWII, and all of Britain's Europeans allies crippled, Winston Churchill was left alone to fight the Nazi onslaught. It was clear that air superiority was going to be a key part in the Battle of Britain. If the Nazis managed to gain the air superiority over the English Channel that would be leave the nazi boat the freedom of the water and an Invasion of Britain would inevitable. But if the R.A.F managed to keep control, of the skies, the Germanysnavy would become under heavy fire, and with a high risk of many ships being lost Hitler would probably not risk the heavy loss, and he would divert all his focus on the to invading Russia. Part 1 What Was The Popular Interpretation And Why Did It Become So Quickly Established During The Early Part Of The War? In this part of the essay I will be evaluating the Interpretations that are from the early part of the war that agree with the popular myth. All theses sources where produced during the time when the battle was taking place. ...read more.

Why Have Later Interpretations of the Battle of Britain Not always Followed the popular Myth? In this part of the essay the interpretations do not follow the popular myth that the Battle of Britain was won "by the few" and Britain winning the battle turned the tide of the war. All these essays were written after the wall so they had the advantage of hindsight, which the interpretations in part one did not have. The writers of each interpretation were able to look at the facts of the whole war and decide how important the Battle of Britain was. They all come to the conclusion that the Battle had little out come on the war. Interpretation 8. Is a book "Grand Strategy" written by J.R.M. Butler, an historian in 1957. The government authorized the book as the official history of WWII; therefore the book should have all the facts. Because the book is written in 1957 therefore the author has the advantage of hindsight and he can put the battle of Britain into perspective. He reveals that Britain was not the key objective in Hitler's plans. Hitler wanted to invade Russia. Russia was his main priority; he would have rather made Britain agree with the negotiated surrender. Butler also says that the Battle of Britain had a very little effect on the outcome of the war. Hitler was not that disappointed that the Nazis were unable to capture Britain. The book is written to inform other historians and students the facts of the Battle of Britain. This book was not written for the general public, and therefore he does not have to be sensitive on the issue of casualties during the war. The writer has all the facts of the British government available to him therefore they should be accurate. He also has the advantage of hindsight; he can look back on how the battle of Britain affected the war. ...read more.

The other myth was that Britain saved the world from Nazism by winning the battle of Britain. However I do not fully agree with this myth. I feel that the Battle of Britain had very little impact on the outcome of the war. Britain could not do anything against Italy and Germany alone and they needed help of either Russia or U.S.A.I feel Hitler's decision to break the German-Russian agreement and invade Russia was when the war turned in favour of the British. America finally joined the war after being bombed by the Japanese at Pearl Harbor. Hitler had made a mistake he could not fight a war on three fronts against three of the world's major powers. America and Britain attacked fought Germany from the west and Russia continued fighting in the east. The tide had eventually turned. As the allies grew stronger and stronger, Hitler's army got weaker and weaker in May 1945 with Germany captured the war was over. The interpretations that back up this view are 8, 9 and 12 these interpretations state that the outcome of the war was not affected by the Battle of Britain. However I do feel the Battle of Britain was important to the war The interpretation that agree with my point of view that the Battle of Britain affected the outcome of the War is interpretation 3. Even if Hitler considered the Battle to be a smoke screen of his plans to invade Russia It gave the British army a much-needed boost of morale after the events of Dunkirk. It also showed that Hitler's army could be beaten. If operation sea lion were victorious than America would have struggled to help the Russians. The Americans could not have traveled across the Atlantic to invade Europe. The U.S.A needed Britain as a base. Without it the Allies would have struggled to win World War II. . 2 Battle of Britain Craig Umbleja 11r ...read more.