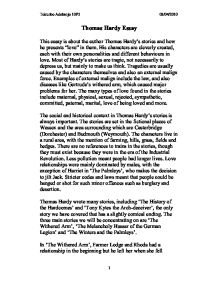 Thomas Hardy Essay This essay is about the author Thomas Hardy's stories and how he presents "love" in them. His characters are cleverly created, each with their own personalities and different behaviours in love. Most of Hardy's stories are tragic, not necessarily to depress us, but mainly to make us think. Tragedies are usually caused by the characters themselves and also an external malign force. Examples of external malign include the law, and also diseases like Gertrude's withered arm, which caused major problems for her. The many types of love found in the stories include maternal, physical, sexual, rejected, sympathetic, committed, paternal, marital, love of being loved and more. The social and historical context in Thomas Hardy's stories is always important. The stories are set in the fictional places of Wessex and the area surrounding which are Casterbridge (Dorchester) and Budmouth (Weymouth). The characters live in a rural area, with the mention of farming, hills, grass, fields and hedges. There are no references to trains in the stories, though they must exist because they were in the era of the Industrial Revolution. Less pollution meant people had longer lives. Love relationships were mainly dominated by males, with the exception of Harriet in 'The Palmleys', who makes the decision to jilt Jack. ...read more.

The other woman marries several years later to a man called Palmley and they also have a son. Both women eventually become widowed and the wealthier woman Mrs Winter takes the impoverished Mrs Palmley's son as errand-boy. The little boy is literally scared to death one day when Mrs Winter sends him on an errand through the dark woods. Mrs Palmley is left even unhappier and vows vengeance against her rival. Mrs Winter's son Jack falls in love with Harriet, Mrs Palmley's niece, who comes to live with her. Harriet is a "proud and handsome girl, very well brought-up, and more stylish and genteel than the people of the village". She clearly has more class than Jack and is not in love with him, but is very flattered so they become a couple. Unfortunately for poorly educated Jack, Harriet is put off by his scruffy letter-writing, and "the weak flame that had been set alight in Harriet's heart soon sank low". She soon jilts him and moves on to someone else. Jack is upset, but also embarrassed that Harriet and her new lover will mock him and his letters, so his pride gets the better of him. After she heartlessly refuses to return them on his request, Jack breaks into the house to steal the letters back. ...read more.

For example, if the engaged Phyllis decided not to act on her feelings for Matth�us, then maybe she wouldn't have become trapped in the love triangle. However, if she wasn't engaged in the first place, then she would have had no problems getting together with Matth�us. Also, she has problems with her strict father secluding her from society. Jack could have stopped worrying about the letters, but instead he chose to break into the Palmers' house, resulting in his death sentence. And if Gertrude had not decided to visit the conjuror, she would not have been led on by his myths, believing that Rhoda was possibly a witch and going to the hanging of Rhoda's son. All these fateful decisions are immense factors that cause heartbreak in the end. Most of Thomas Hardy's stories finish in tragic disaster, as a result of the characters' fateful decisions, actions and the external malign force. Like I mentioned earlier, I think Hardy chooses these endings not necessarily to depress us, but to make us think. If characters like Jack and Gertrude had not made their fateful decisions, they could have escaped their premature deaths. Thomas Hardy was a great author, his characters very cleverly created to show how imperfect real human beings are, and his stories highlighting many different real-life issues. ?? ?? ?? ?? Tokunbo Adebanjo 10P5 03/04/2010 1 ...read more.