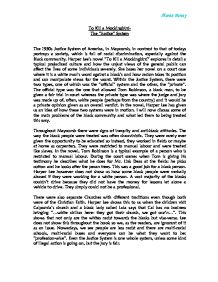 To Kill a Mockingbird-

To Kill a Mockingbird- The "Justice" System The 1930s Justice System of America, in Maycomb, in contrast to that of todays portrays a society, which is full of racial discrimination, especially against the Black community. Harper Lee's novel "To Kill a Mockingbird" explores in detail a typical prejudiced culture and how the unjust views of the general public can affect the lives of some individuals severely. She bases her novel on a court case where it is a white man's word against a black's and how racism takes its position and can manipulate views for the worst. Within the Justice System, there were two types, one of which was the "official" system and the other, the "private". The official type was the one that allowed Tom Robinson, a black man, to be given a fair trial in court whereas the private type was where the judge and jury was made up of, often, white people (perhaps from the country) and it would be a private opinion given as an overall verdict. In the novel, Harper Lee has given us an idea of how these two systems were in motion. I will now discuss some of the main problems of the black community and what led them to being treated this way. Throughout Maycomb there were signs of inequity and anti-black attitudes. The way the black people were treated was often chauvinistic. They were rarely ever given the opportunity to be educated so instead, they worked in fields or maybe at home as carpenters. ...read more.

At that time if it was a "White man's word against a Black man's word" and the white always won. People found Tom Robinson guilty from the very start and the mob, which included the Cunninghams, tried to lynch Tom because of this verdict but then Scout made the people look really appalling when she questions Mr. Cunningham about his entailment. By doing this, Mr, Cunningham was reminded, by Scout, of how much Atticus has done for him and tries to gain his respect. We also realise that after the court case one of the jury members was uncertain of his verdict because of the amount of time taken to give the actual verdict. We assume it was one of the Cunninghams who also just happens to be kin of the Finch family by being a double first cousin. However, Atticus chose not to "strike him" as he says. There were many precautionary measures taken to protect Tom whilst he was in the prison-house on the night before the trial. Above the Maycomb Tribune office, "Mr Underwood and a double-barrelled shotgun were leaning out his window" This shows us how some of the local residents are not as racist and some actually support Atticus. The fact that Atticus chose to protect Tom in the first place reveals his own nature and that he is a brave and courageous man. When he took up the case, it was partially because if he didn't, he felt wouldn't even have been able to look at his own kids in the eye ever again. ...read more.

In this novel, Harper Lee stereotypes a typical "white trash" family i.e. the Ewells and a "typical" black man and she shows how even though they comprise of the same lifestyles (even though Tom's was more controlled and cleaner) because the Ewells were white, or might I say pure, they were accepted in society but because Tom was coloured he was rejected. These were just purely unjust views of the public. In conclusion, I believe that the Justice System, itself, was fair. At that time a White man would go through the same trial stages as a Black man however it was the people and the influence in the court that affected a jury's decision and if there was an all-white jury against a black then the verdict would be GUILTY AS CHARGED. Also through writing this novel we can deduce that the case of there being these two different systems can really make a difference on one whole court. Harper Lee's portrait of the black society's problems does enforce the injustices of the "Justice System". By communicating to us, as the reader, through the point of view of a child, it helps us to learn and develop our understanding of the problems that overrode the black society of the time in the 1930s and it is as if our minds are just as naive as a child's. We learn and witness the reality. I feel that the novel "To Kill a Mockingbird" was just for us to understand the concept of the past and raise our awareness of the injustices against a coloured person. ?? ?? ?? ?? Sharan Punny ...read more.