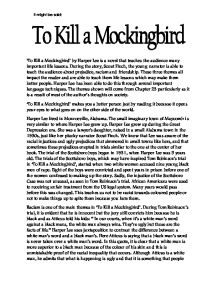 To Kill a Mockingbird by Harper Lee is a novel that teaches the audience many important life lessons. 2nd version.

'To Kill a Mockingbird' by Harper Lee is a novel that teaches the audience many important life lessons. During the story, Scout Finch, the young narrator is able to teach the audience about prejudice, r****m and friendship. These three themes all impact the reader and are able to teach them life lessons which may make them better people. Harper Lee has been able to do this through several important language techniques. The themes shown will come from Chapter 23 particularly as it is a result of most of the author's thoughts on society. 'To Kill a Mockingbird' makes you a better person just by reading it because it opens your eyes to what goes on on the other side of the world. Harper Lee lived in Monroeville, Alabama. The small imaginary town of Maycomb is very similar to where Harper Lee grew up. Harper Lee grew up during the Great Depression era. She was a lawyer's daughter, raised in a small Alabama town in the 1930s, just like her plucky narrator Scout Finch. We know that Lee was aware of the racial injustices and ugly prejudices that simmered in small towns like hers, and that sometimes these prejudices erupted in trials similar to the one at the center of her book. ...read more.

This teaches us that being r****t is wrong and just because someone is a different colour, it does not make you superior to them. When Dill arrives in Maycomb, he immediately befriends Scout and her brother Jem. Their friendship is a strong one and teaches us to be nice to one another and to show acceptance. Scout also makes friends with Walter Cunningham, who comes from a very poor family; they do not take anything from anyone as they cannot pay anything back. The Cunningham's are very poor farmers and Atticus explains to Scout that because the Cunninghams are farmers, they were affected the most: "The Cunningham's are country folks, farmers and the crash hit them the hardest". This is a perfect example of how the stock markets crash during the Great Depression, hurt the farmers the most. Scout learns from Calpurnia that just because someone is different does not mean she can judge them. Scout's friendship with Walter is a funny one; one minute she beats him up, then he is invited over for lunch. In Chapter 23, Scout plans to ask him to dinner even though she had decided that she was going to beat him up the next time she saw him. ...read more.

This goes to show that we have no right to judge others since we cannot fully understand their viewpoint. Aunt Alexandra is also quite prejudiced when it comes to the Cunninghams. When Scout suggests inviting Walter over for dinner, Aunt Alexandra says clearly that she does not think they are the kind of folks that Scout should mingle with. She thinks that they are superior to the Cunninghams and better than them. Aunt Alexandra is prejudiced towards them because they live out in the woods and are poor. Harper Lee teaches us to be prejudiced towards others because of what they look like on the outside, we should look deeper than people's wealth and status. In conclusion, 'To Kill a Mockingbird' is a novel that teaches the audience many life lessons. It teaches us to never judge a person on the way they look or the colour of their skin, it teaches us to look deeper and not believe everything you hear. Harper Lee has written a fabulous book on a town filled with prejudice and r****m narrated through the eyes of a young girl who witnesses the ugly truth and the unjust treatment depending on the colour of the person's skin. ...read more.